In the summer of 1848, after his tour of duty in the Mexican War, Joel Foster visited St. Croix County, near Hudson, WI. Foster spent several weeks exploring the area along the St. Croix River while he relaxed, hunted and fished. One day while fishing the Kinnickinnic River, he discovered the impressive falls where the South Fork meets the Kinnickinnic. Foster went back home to St. Louis, packed his belongings and by early fall had returned, to establish his new home near the falls. As Foster and Dick were building Fort Foster, what is now River Falls, they were overwhelmed by the spectacular, beautiful color changes as summer did a metamorphosis into the snow season.

During that same summer, the Powell brothers also claimed land near the falls. And, in 1852 they established the areas first commercial structure, Powell Store. Goods sold at the Powell Store; that is located at the corner of Main Street and Maple Street today, were transported by horse and wagon from the river landing at Prescott. Powell Store quickly expanded into a hotel, post office and community center. A few years later, the Powell brothers are credited with convincing Wisconsin state officials to establish a state university in River Falls. That educational institution is known today as the beautiful University Wisconsin River Falls – that is divided by the Kinnickinnic River.

Using the awesome natural power generated by the falls, in 1854 Foster opened the first saw mill in River Falls – soon there were four saw mills and a flower mill. Followed shortly by a brickyard and a black smith shop. The power of River Falls’ hill and valley’s jaw-dropping beauty attracted people to the area that the Native Americans, Chippewa and Sioux, had inhabited for centuries. Then came the railroad! No stopping River Falls, now!

For the next 81 years River Falls prospered and grew, while residents and visitors alike enjoyed the beauty of the fall color changes. Then in 1929, the progressive little city, on the riverbank near the falls, became only the second city in Wisconsin to have a golf course; River Falls Golf Club was born. It was the “Gilded Age” of golf course development – a time when no earth was moved, the natural topography dictated the golf course design. During this Gilded Age most of the Twin Cities most notable golf courses both public and private were established. Including: Interlachen, Minikahda, Keller, Meadowbrook and Northland in Duluth.

Golfers, who play River Falls Golf Club for the first time, become captivated by the variety of panoramic views that are found from hilltop tees and/or greens on over half of the holes. For centuries the erosion effects of water, from snow melt in April and May and monsoon-like spring rains in June, have carved canyons that rival those found in the Ozark Mountains. The open farm fields and grazing meadows on the relative flat hilltops give way to wooded canyon walls with a creek in the bottom. There is no better time to visit River Falls Golf Club than when the vivid green background of the hardwood forests turns to the various shades of yellow, gold, amber, orange, red and purple. This four to five week season, within a season, can create a lifetime of memories.

While you are enjoying the golf course that is conditioned to country club standards, there will be a few holes that will become your very own “signature holes”. I will relate the two holes that stand out in my mind as I recall those many enjoyable tournament matches in the Old Fire Cracker – 4th of July Tournament. The par-5 fifth hole may be unique in the world of golf course design. The elevated tee, overlooking the valley floor below is like hitting a tee shot from the narrow end of an ice cream cone out the trumpet mouth. Trees hug the right side of the tee and the out of bounds is only about 220 yards away (depending where you tee from). Meaning that the golfer must lay up short of the OB fence or hit what I always referred to as a “Duck Slice” (that would be a duck hook for a left-handed golfer). The harder a golfer can slice his tee shot the closer to the green he will be for his second. But hitting the green for an eagle putt is a risk/reward shot to a sliver of a green, bunkered on the right and OB left. Play it a few times your scores will range from 3 to 8. Fun! My other signature hole is the over-the-canyon par-3 seventeenth. What a great hole! With the wind quartering, left to right and into your face, golfers must commit to there chosen line. The further right your ball goes the farther it is to carry the canyon. Truly one of the most intimidating (no water) par 3s I have ever played – especially if you are protecting a lead in your match!

Yes, Joel Foster got it right. Play River Falls Golf Club and see exactly what he did in 1848! 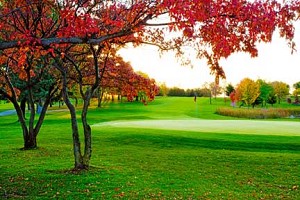 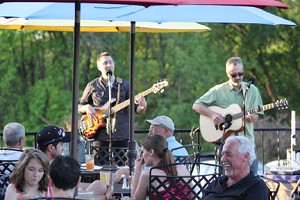 Friday nights on the patio 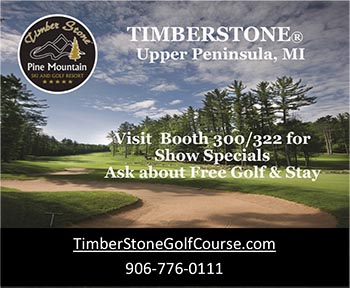