The Bull At Pinehurst Farms – Wisconsin’s Most Memorable Golf Challenge

The Bull at Pinehurst Farms, located in Sheboygan Falls, Wisconsin, is the only Jack Nicklaus Signature golf course in Wisconsin and has garnered top reviews from all over the country, including being ranked 4½ Stars by Golf Digest and being named to Golfweek’s America’s Top Courses every year since 2005. Golf Digest has named The Bull to their “America’s 100 Greatest Public Golf Courses” list every year since 2011, and it is currently rated #70 in America. Shortly after the course opened, Golfweek named The Bull their “Best New Daily-Fee Course in America” in 2005, Golf Digest named The Bull the first runner-up “Best New Upscale Course in America” for 2004, and GOLF Magazine named it one of their “Top 10 New Courses You Can Play” for 2003.

The Bull is hosting a 2017 U.S. Open qualifier this summer as well. With the 2017 U.S. OPEN at Erin Hills this June, remember that The Bull is just one hour’s drive north… and minutes from Kohler! After watching the best golfers in the world play, what could be better than getting in a round of golf at The Bull? Tee times during U.S. Open Week will fill quickly, so it’s advised to book your tee times sooner rather than later!
In keeping with the heritage and rich tradition of this 788-acre farm, The Bull was chosen as the name for this Jack Nicklaus Signature Golf Course. Construction on The Bull began in August of 2000, and was completed in the fall of 2002. The entire 18-hole course opened to the public on June 10, 2003. The course meanders over 418 acres of the farm and features breath-taking views of meadows, woods, wetlands and streams. Each of the 18 holes is named after an influential bull bred by Pinehurst Farms, each with its own unique story. The Bull features five sets of tees stretching back to over 7,300 yards.
In addition to a world-class golf course, The Bull also features a world-class practice and teaching facility, a clubhouse featuring Champions Restaurant – a full-service bar and restaurant (open year-round for lunch and dinner) with private dining and meeting rooms, a fully stocked golf shop, and men’s and women’s locker rooms. On the second floor is a billiard room called “The Bear’s Den” – a private lounge with a wet bar, TV and other amenities.
A new addition in the fall of 2014 was “The Bull Pen Pub.” Located on the lower level of the clubhouse with easy access to the patio and putting green, the Pub features a wide variety of domestic, imported and craft beers, wines, snacks, fun and music.

The beautiful Heritage House Event Center at The Bull is perfect for large golf outings, wedding receptions, conventions, meetings, and more. The facility can accommodate over 350 people and has three individual rooms that can be opened into one grand ballroom, providing a comfortable atmosphere for groups of all sizes.
Visit their website for information and to download their FREE App… you’ll be entered into a drawing for a chance to win a Steak-n-Play Package for the 2017 season.
The Bull is located on the south edge of Sheboygan Falls, just three miles west of I-43 on Highway 28, then south ¼ mile on Highway 32. They are just minutes away from Kohler, one hour north of Milwaukee, and two hours from Chicago. 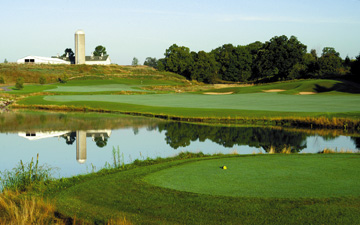 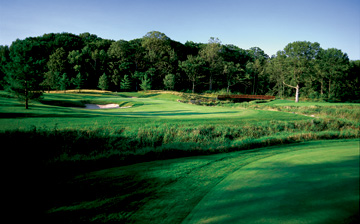