I can’t believe that I’m taking on this subject. Not that I’m afraid to say how I feel… it’s that I’m really conflicted about music on golf carts.

When I was younger, I always walked… never dreamed that I’d be cart guy. But, I am a cart guy, and a much more casual player than I used to be. Recreational golf has become for me – recreational. And has been for many years. I’m through playing in tournaments. Over the years I’d gotten pretty good at separating the two types of golf – tournament and recreational… and they are two different games.

Too often, people play recreational golf as if it’s tournament golf. Usually takes the fun out of it. They’ll say that they’re competitive… yeah, so am I… however, playing golf with friends and family is recreation. Even our leagues are recreation – not tournament. I’d say our league championships are tournaments, but the rest of the league season is recreational.

If our league members want to play tournament golf – great! Go play in State Ams and State Opens, etc… that’s great stuff. But golf leagues at Deer Run GC are about having fun.

So, does having fun mean riding in a cart? Sort of. You have to admit it… golf carts are fun. And easy. And conducive to carrying beverages and even snacks. Not to mention your golf clubs.

Don’t get me wrong… walking with a little carry bag and playing pure golf is one of my favorite things. It’s sort of like classical music – it’s great. But, I also like/love a lot of pop music. Probably not much since 1973… but, I still love it.

The combination of driving a golf cart, playing golf with family and friends, and listening to good pop music from the 60s and early 70s is definitely a good time. At least my idea of a good time.

I believe in diversity. But diversity is about options… it’s about choices. Ironically, a lot of the people who talk about diversity don’t really want diversity… they want uniformity… their way for EVERYBODY only

Now, I also believe that with real diversity comes freedom… the freedom to choose. And, that it’s a two-way street. If my golf course wants to have music on the carts… people have a right not to play at my golf course. But they don’t have a right to yell at the people playing music on our carts. That’s not diversity… that’s uniformity. And, the courses that don’t want music on their carts have every right to kick off the people playing music on their carts.

This is not understood. People think that they have a right to do anything… and insist that it’s that way for everyone. This is not well thought out. A private business has a right to set its own rules and standards. If people don’t like it… they don’t have to go there. They can vote with their feet. 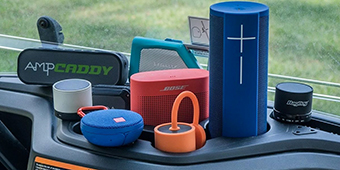