Prize Money On TOUR… Something Is Wrong!

The Psychic is getting ready for bed, but his mind is troubled. As he tosses his, now three-year-old, Ryder Cup logo golf shirt into the laundry basket, his mind flashes back to the Ryder Cup. The crowds. The drama. The celebration. The atmosphere. He slips into his favorite PJs, but the Psychic feels a sense of unrest. “What is the problem?” he thought.

After his early morning round with his regular foursome, the Psychic watched Rory outlast the field of the world’s greatest players and win the $15 Million first prize paid to the TOUR Champion.

Sunday afternoon golf fans across the world watched Rory McIlroy make more money winning the TOUR Championship ($15 Million) than his golf hero Jack Nicklaus made in his entire lifetime ($9.7 Million). Something is wrong, Fat Jack, who has the most all-time majors victories (18) and is third on the all-time PGA TOUR wins list (73), won just $5.7 million in his PGA TOUR career. Just $78,548 per win.

As the Psychic places the worn turban on his head he chuckles to himself. “If anyone could see me in my plaid pajamas, fur-lined house shoes and a centuries old turban on my head they would laugh out loud.”

The Psychic is searching for the reason for the monster money paid to professional athletes and the focus on big events.

As the crystal globe began to glow, the Psychic sees flashes of the World Series, World Cup matches, the Olympics and the Masters. He sees Federer. He sees Nadal. He sees Tiger winning the TOUR Championship in 2018 then the emotional victory at the 2019 Masters. What does all this mean? The Psychic searches for the answer.

Then the Crystal ball shows a series of memorable Super Bowl ads with the cost of running that 30-second ad flashing in neon lights. $5.25 Million!! The buzzer beater at the NCAA Final Four – a 30 second ad in the Championship Game costs $1.7 Million!! – and the stars, college kids, don’t even get paid.

Next the crystal ball flashes an advertising term, a term the Psychic had never heard – APPOINTMENT VIEWING. The know all magic marble explains that the spectacle of watching major sporting events and championship games “LIVE” are not the same when on a DVR. Advertisers know that there are no other programs that people consider to be “appointment viewing” these days. It just doesn’t have the same effect.

The Psychic understands. The day after the Masters everyone around the coffer machine is talking about Tiger hugging his son celebrating the emotional victory. Day late news is old news in sports. Sports fans want to experience the action real time.

Suddenly the Psychic sees the scene change again. The television viewers, sport fans, golf, baseball, etc., watch feeling the personal excitement. They feel the tension as if they were actually a participant. The Psychic suddenly becomes aware that the bigger the prize for winning, the more fans want to watch.

They fantasize about how winning the $15 Million prize would change their lives. The Psychic suddenly knows that parents, after watching Rory win $15 Million, will go to Dick’s and purchase a set of golf clubs for their child hoping that the clubs might enable their son or daughter to win the big prize. The prize that becomes a life changer.

The Psychic now understands that if it were not for the video images of sporting events being telecast world wide there would be no advertising dollars to increase the purses. The Psychic understands that in today’s world everyone is seeking instant gratification. Money rules our thoughts and minds. The consortium of major sporting event organizers, television networks and advertisers control our habits by creating “can’t miss” action sports programing.

The crystal ball displays stadiums all over the country where Power 5 conference football games are played. The video like images show a drop off of attendance (even programs like Clemson) every year. Then the crystal ball shows attendance and TV ratings for the BCS playoffs and the final Championship Game. (The BCS Championship Game is third in cost per 30 second only to the NCAA Championship Basketball Game and the Super Bowl). Proving once again that advertisers want to spend their money on APPOINTMENT VIEWING events.

By 5:15AM the crystal ball was covered. The worn turban was in its resting place and the Psychic was back in bed knowing that MONEY was driving the prizes paid for major sporting events. The prize money will continue to rise and the TOUR players will continue to make more money. 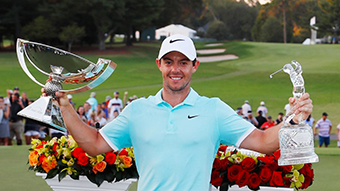