The most important aspects to improving your ability to hit successful bunker shots are 1-An understanding of the design of the sand wedge. 2-A set-up conducive to an effective bunker shot. 3-The basic fundamentals of full swing. 4-Understanding that the texture of the sand actually INCREASES your success rate. 5-Accepting a potentially embarrassing result when attempting to “do it like the pros on TV” which is a REQUIRED step to becoming an improved bunker player.

PROPER UNDERSTANDING OF YOUR EQUIPMENT

HOW DO I VARY THE LENGTH OF THE SHOT?

WHAT IF THE BALL IS BURIED?

Practicing your bunker shots should be fun and bring out your creativity. Do not just practice “easy” bunker shots… bury a few, place balls around the perimeter of the bunker and use your imagination and understanding for their success 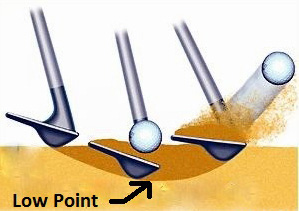