There Is No Perfect Golf Swing

The Psychic exhaled in exhaustion when Matthew Wolff’s 27-foot putt found the bottom of the hole at the 3M Open. He knew that he was too tired to follow a playoff.

During the inaugural 3M Open, the Psychic spent the entire final round running between the final two groups. Bryson DeChambeau, the rising star with the Mo Norman swing, was attempting to chase down TOUR rookies Collin Morikawa, with the text book swing, and Matthew Wolff, with the hybrid golf swing that combines Jim Furyk and Mr. X, Miller Barber.

The two TOUR rookies, who got into the 3M Open with sponsor exemptions, were playing leapfrog with the lead, as Bryson remained just a short leap behind. On the final hole of the tournament the analytical DeChambeau hit a gutsy drive followed by a 6-iron to 8 feet. With that awkward looking putting stroke, Bryson leaped into the lead with the eagle putt. His first lead all day. DeChambeau plucked the ball from the hole with the stare of a victorious warrior.

We all know the rest of the story; Wolff holed his 27 footer for eagle to nip Morikawa and DeChambeau by one stroke.

The Psychic loves golf. He loves to play golf, but even more, he marvels at the skills illustrated from the great golfers who make a living playing tournament golf. The Psychic traveled to watch the live tournament action then returned to his flat screen to watch re-runs on the television.

Relaxing in front of the huge flat screen with a cool adult beverage, the Psychic, still wearing his 3M Open cap, re-ran the entire final round of the Championship. With a keen eye, trained by years of concentrated observation, the Psychic was scrutinizing the contrast… and similarities in golf swing of the three players, all under age 25.

The Psychic whispered out loud, “What golf swing techniques will be taught in the future?” The Psychic flicked the remote’s power button to off and tipped the adult beverage glass straight up crunching the remaining ice cubes with his molars.

As he walked into his study, the Psychic replaced his 3M Open cap with the ancient turban and removed the chamois cover from the crystal ball. Reading his mind, the crystal ball flashed to 21st century golf training aids. The training aids included computer enhanced robotic devices that created muscle memory for repeatable golf swings. He observed rubber bands to keep upper arms together and gadgets that attached to a golf club to keep the wrist in perfect position. On and on!

Suddenly in the back of the glowing orb the Psychic focused on a golf school that encourages the “flying right elbow” that Miller Barber made famous. The no personality pro with the nickname, Mr. X, had 43 professional victories, but was never a crowd favorite. This is the same “funny” golf swing that 3M Open winner, Matthew Wolff, used to win over $1,152,000 in his first event. This no tension swing seems to never breakdown under pressure. The crystal ball did a warp speed review of Jim Furyk with the same swing. Furyk was the 2003 U.S. Open Champion and PGA TOUR Player of the Year in 2010. In addition Furyk has fired a 59 and a record 58 in PGA TOUR events. The Flying Right Elbow swing seems to work.

From the depths of the crystal ball the Psychic observes Mo Norman, the Canadian golfer known as the best ball stricker of all time. Norman hit every shot in the middle of the golf club. Suddenly the ball is filled with Bryson DeChambeau who uses Norman’s swing with golf clubs that are the same length.

Finally the Psychic witnesses a transformation in teaching techniques. The Psychic sees golf professionals in the future, observing individuals who have a natural golf swing, who have been trained to start with the natural move and enhance the natural swing. The Psychic sees golfers in the future with a variety of unique swings who become winners through practice and trusting their natural move. 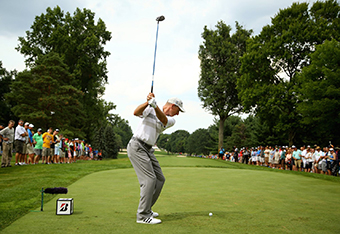 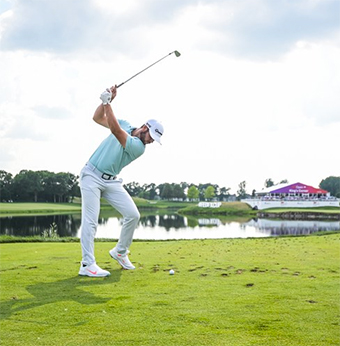