The question is, “Are human beings animals (or critters)?”

If you believe, like I do, that humans are animals, you will agree with this month’s Critters On The Course about human critters who are invading our golf courses.

The ad to the right is a perfect example of critters invading our golf courses. Watch the video then read the balance of the story.

I have been discussing this ad and the topic of not real golfers invading our golf courses with golf friends the last few days. The reactions are as you might expect.

Comments are as follows:

“We already have enough golfers who do not fix divots or rake bunkers. We don’t need a new crop of golfers who just want to get drunk and mess up our courses.”

“If you want to have seven hour rounds bring them on.”

One golfer asked, “Why would Coors create ads like that?”

My answer to that question, “The ad agency representing Coors is from the new generation. They have gone off the deep end. Like much of America.”

The only thing that the Coors ad agency has not touched on is the 28-year-old PhD who still lives in the parents’ basement. The ad would go something like this – having a Coors Light watching soap operas while filling out a mortgage application for a million dollar penthouse condo before he goes job hunting.

I have no problem with golfers drinking a few beers on the golf course, but enough is enough. I do have a problem with Coors sponsoring ads that have a negative effect on the game that we all love. It appears that the ad agency’s goal was to create new places to drink Coors Light.

I belong to a golf group on Facebook. Yesterday, a regular golfer was asked by his friend and golfing buddy, “Do you want to smoke a joint as we are playing golf today?” The golfer’s posting on Facebook was, “Today I lost respect for a friend and lost a golf buddy forever.”

Yes, the world is changing! Yes, millennials feel entitled. New non-golfers (critters) are invading our golf courses with no idea of the history and respect for the game. There is no sense of respect for fellow golfers or the golf courses where millions are spent on maintenance.

The truth is that other organizations and companies besides Coors are to blame. Part of the lack of respect for the game lies with the Ryder Cup. The increasingly rowdy Ryder Cup crowds have taken a page from the Seattle Seahawks 12th Man.

TopGolf, first believed to be the savior of the golf industry, has proven to be the exact opposite. TopGolf has in fact added a few golfers to the game. But these golfers have learned to play while loud music blares. Golf industry insiders have discovered that many occasional golfers with limited discretionary entertainment money are spending those dollars at TopGolf rather than on green fees.

In a search for new ways to bring new golfers into the game the golf industry has lost sight of what is real. Golf Boards might have added a few new players, but those players enjoy driving those Golf Boards all over the green oasis rather than playing the game.

The golf industry will do OK until the Baby Boomer generation dies off. The question that I continually ask is who will replace these golfers, who respected the players and the courses.

Have a beer on the golf course. But don’t purchase a Coors Light! 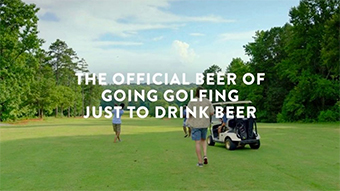