Running Aces Casino And Racetrack – The Best Bet In Town

From 1953 to 1995, the Washington Generals played the Harlem Globetrotters over 13,000 times and won only 6 games. Despite that paltry win percentage, Krusty the Clown from “The Simpsons” once placed a bet on the Generals, claiming, “I thought they were due.” Of course, he lost that bet. But the lesson here is that a little friendly wagering (within reason, of course) can be a source of fun. You must take into consideration, though, that not all bets on sporting events are good ones. Take a look at my NCAA bracket from last year as an example.

I do have a tip for you though. There is a place nearby that counts as a sure thing in the entertainment department. Card players and gamblers have their favorite locales to play in the Twin Cities area, but did you know that the closest place to downtown Minneapolis and St. Paul is Running Aces Casino & Racetrack? It’s just 20 minutes north of 694 in Columbus, MN. Take I-35 north to exit 129 (the first one after 35W and 35E meet), go west less than a mile, and you’re there. Even though it is a place to gamble, it’s much more than that. It’s also a family-friendly environment where everyone can find something fun to do. One way you can place a bet at the track is a Superfecta, where you attempt to pick the 1st through 4th place finishers in any given race. Here are my Superfecta picks for Running Aces.

Good bet #1 is the live harness horse racing. Running on Tuesdays, Saturdays and Sundays, this year’s season began May 20th and goes through September 16th. The only exception to the schedule is July 4th – races will run on Monday July 3rd at 5:00 pm instead. First race is at 7:00 on Tuesdays, and 6:00 on the weekend. On a nice day, sit yourself down outside and watch the horses run! There’s plenty of room inside too if that’s your preference. Reserved seating is available for purchase on a first come – first served basis. If the live races aren’t enough, you can watch simulcasts from around the country and place your bets all year long.

Good bet #2 is the card room. Running Aces has the largest variety of table games in the state, according to Aaron Bedessem, Director of Marketing for Running Aces. There’s Blackjack of course, as well as Pai Gow poker, Baccarat, Texas Hold’em and others. Best of all, there’s no ante or commission on any of the games. No matter your ability, there’s a game there for you. “We have everything from $2 tables to high limit tables,” says Bedessem. “There’s also daily Hold’em tournaments that range from free to an $1,100 buy in, depending on the day, so everyone can find the right game for them.” Serious Blackjack players can choose from single deck, double deck, four deck and six deck games.

Good bet #3 is the Trout Air Tavern. The overall idea of this full service dining experience is to embrace our Minnesota side. Foremost is their trout dinner made from fish you just caught (more about that below). Bedessem says they use local farmers and purveyors as much as they can to provide great Minnesota dining 24 hours a day. They do take reservations (651-925-4577), or online at runaces.com/reservations, but walk-ins are always welcome.

My nephew had his 18th birthday party here a few months ago, and while he was trying his luck at the tables, my wife and I grabbed some carne asada tacos and chicken tenders and watched the horses run. The food is very reasonably priced (most items are around $10 or less), and a great value. Be sure to check out the tavern favorites like the pot roast ($9) or the Tuscan turkey sandwich ($11.50). They also have several gluten free items if that’s a necessity for you. For an even better deal, see their daily specials like prime rib, Lasagna, hand carved ham sandwich or orange chicken with white rice for $7.

It is a tavern, so they have a wide variety of beverages to slake your thirst. Running Aces keeps the “local” in their beer, wine and spirits too by offering great Minnesota brands. You can upgrade your cocktail for a dollar all while supporting local companies.

Good bet #4 is the Trout Air Fishing Experience. If you’re looking for a little bit of nostalgia, then this is the place for you. Running Aces partnered with the Trout Air, to give guests the same experience that the original Trout Air offered from 1965-1998. For about $20, you can catch your own fish and have it prepared in the Trout Air Tavern. Meals come with your choice of potato and soup/salad. They supply a 10-foot pole, the bait and the fish. All you have to do is reel it in – you don’t even need a fishing license. They are open Tuesdays and Fridays from 4:00 to 8:00, and Saturdays and Sundays from 11:00 a.m. to 8:00 p.m.

Side bets: With so much to do at Running Aces, I doubt you could do it all in one day. That’s the beauty of the place – you can have any kind of experience you’d like. Bedessem says, “It’s a great place for a first date, a bachelor/bachelorette party, or a family fun day. All this fun and in a smoke free environment.” On Saturdays, it’s Keep It Local Night. Leinie’s Live offers live music after the harness races. Music begins after the last race and goes until about midnight. For $4 you can grab a Honey Weiss or a Summer Shandy. Check the schedule (www.runaces.com/LeiniesLive) to see who is performing on the night you want to go. You can also find local beers and wines, and even try a few samples. Tuesdays are great for the frugal customer; you can get a beer for $2 or $1 hot dog, chips or soda. On Sunday it’s Family Night, where they have a kids coloring contest, face painting and free Trout Pond pole rentals for kids.

And just when you thought that was it, Running Aces has another trick up its sleeve. During non-racing months, they offer Bingo on Tuesday night and monthly Comedy shows. Don’t worry about the time, as they are open 24 hours a day. I might not have the correct tips to guarantee you’ll win money on the horses, but take my advice on Running Aces. Whatever you want to do and whenever you go, they’ll have something fun going on. 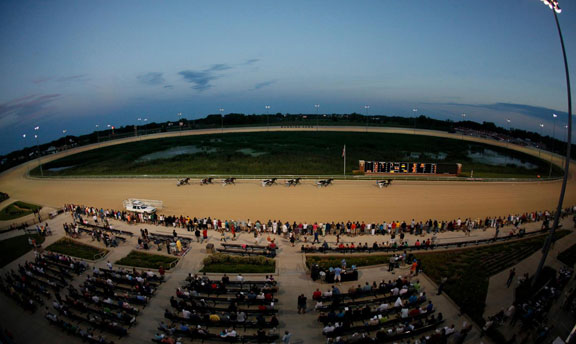 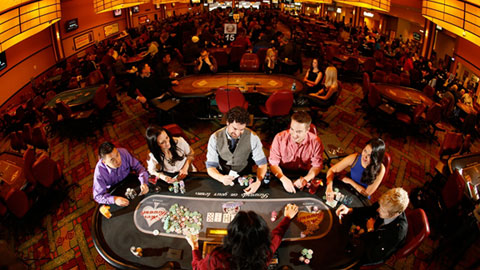