The late sixties were a turbulent period in American history, but some great fashion came out of it, including the use of the American flag in apparel. Iconic images of that time were Peter Fonda and Jack Nicholson in Easy Rider, Jimi Hendrix’s version of the Star-Spangled Banner and Don Maclean’s Miss American Pie album cover. In Loudmouth’s quest to make what’s old new again, Stars & Stripes was a no-brainer.
“When we ran out of product, I was ready to move on to the next patriotic design. But we got so many requests to bring it back, it became a staple pattern. Stars & Stripes and Shamrocks are the only two designs that we keep in stock year after year,” says Loudmouth Founder & Designer, Woody. “We stress to our customers that Loudmouth designs are just as fun, if not more so off the golf course. I think the Stars & Stripes pattern makes that crossover easier.”
After the success of Stars & Stripes, Loudmouth began releasing new patriotic designs annually. Additional designs to the patriotic collection include variations of stars, stripes, red, white and blue. Patriotic patterns currently available include: Stars & Stripes, Old Glory, Declaration of Indepants, All Stars and Flagadelic.
Loudmouth patriotic designs are available in men’s and women’s silhouettes including pants, shorts, skorts, sport coats and more. In addition to the stocked items, these patterns can be ordered though the Made-to-Order shop, which lets customers customize the waist size and length of their garment to provide the ultimate fit. Loudmouth patriotic apparel is made from 97% cotton and 3% spandex. For more information visit www.loudmouthgolf.com. 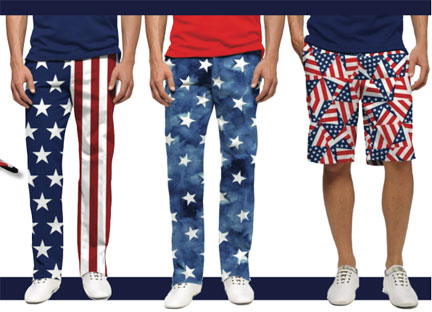 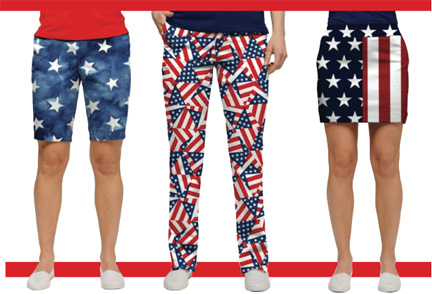