The University of Wisconsin’s home golf course, University Ridge, is also home to the PGA Champions Tour’s American Family Championship. Now in it’s second year, everything about the showcase event is bigger and better. Local legends and tournament hosts Steve Stricker and Jerry Kelly are back, but this time they’re both 50… and expected to compete in the event. Can a host win the event? Do ostriches really bury their head in the sand? We’ll find out soon about the former, and probably never care about the latter. (No disrespect intended to ostriches.)

But, for the purposes of this article, let’s assume you don’t know anything about the event, the host course, or what happened here last year. And now, let’s catch you up fast. Kirk Triplett won last year’s inaugural event. Over 1,000 volunteers and 56,000 spectators caught plenty of drama from the assembled pros, including an ace by Wes Short, Jr. on #12. The tournament was (and is this year) covered by The Golf Channel and, when it was all said and done last summer, the first ever American Family Championship raised over $1 Million for Wisconsin charities. That’s big. That’s awesome!

But this is bigger and even more awesome! Weather permitting, that 56,000 (guest number) could even be doubled this year, based on the prestige the event is attaining and who the viewers will be able to see. Check out the lineup of professionals who scrambled to join the fun and festivities this year – the names projected to dance across Madison’s prestigious leaderboard the last weekend in June: Big John Daly (should love these beautiful, new bentgrass greens), Sir Nick Faldo (can he play and commentate simultaneously?), Vijay Singh (the guy who won 34 times on the PGA TOUR), Colin Montgomerie, Bernard Langer (all he does is win, win, win), Corey Pavin, Kenny Perry and some other names the hosts are being a little tight-lipped about. (Might we see Brett Favre, Fred Couples, Davis Love III and/or David Toms?)

Whoever shows up is in for a blast, from the Pro-Am on June 21st to Darius Rucker’s concert on opening day of the tournament – June 23rd – and throughout all three days of the main event. PGA Superstar Steve Stricker is revered by his peers and has had no trouble getting them to come enjoy a week of beer and bratwurst in Wisconsin. In fact, he and Jerry Kelly played with another committed attendee, Skip Kendall, in junior golf, on the Amateur Tour and on the PGA TOUR. It should be fun watching the three of them tee off together on the Champions Tour now! Who gets the best of whom now, I wonder? (The answer to that question is obviously: The Fans!)

The host course is spectacular, both from a player’s and spectator’s standpoint, annually considered amongst the best college courses in the country. A quick run through both sides of the course reveals a ton of elevation change, plenty of tree-lined fairways, water, hazards and risk/reward shots. Designer Robert Trent Jones, Jr. maxed out some of Madison’s most dramatic property, packing it with FIVE Par 5s and FIVE Par 3s.

The front nine: Kicking off from the high point of the property, the course dives downhill and almost immediately (at hole #2) hits one of the most intriguing designs on the property, a “Zig Zag” of a Par 5, that can make you pause several times to regain your bearings. While the iconic 4th hole (tight and guarded by the pond to the right) is many a patron’s favorite, my personal favorites are the Par 3, downhill 8th, with the boulders scattered everywhere and the dramatic ascension back up to the clubhouse on 9.

The back nine: There’s no doubt the back is more dramatic… the way courses always should be (especially when they are hosting a Tour event)! There are far more trees in play, and far more shots where concentration is not only advised but required. There is also plenty of beauty to take in off the tee boxes, from the “Dropshot” Par 3 at 12, to “Lone Elm” the downhill, drivable Par 4 with plenty of options off the tee. #16 is a love/hate hole for many players. It’s awesome as a Par 5, in that it is very reachable with two good shots, but two bad shots can really eat up your scorecard here. It is one of my two favorite holes on the back nine, with all the dips, dives, bunkers and elements to consider. And then you get to my favorite hole on the entire course, the dramatic all-carry 17th hole “Reflections.” Pond protected, this could be the hole that determines the Champion on Tournament Sunday. But it’s not over until it’s over, and 18 makes you take the “Capitol Climb” back up to the clubhouse. You can’t win if you don’t make it here.

That spectacular clubhouse is perched on top of the hill, and daily pumps great smells out of the kitchen over the fairways from The “W” Grill. There’s a lively patio, a fully stocked pro shop and an indoor training center for the local teams, as well as the fabulous outdoor practice facility for everyone to work on their games. This property has it all for the player.

From a spectator’s standpoint: All the downhill holes provide many different platforms of unobstructed viewing – natural stadium seating, so to speak. The course is used to hosting Wisconsin State Golf Association events, so they’ve perfected bleacher placements (more than ever this year), optimal walkways, and directing spectators to points where they can take in the most action. Given last year’s success, the tournament organizers have committed to more bleachers, more concessions and brand new video boards on the 17th and 18th greens. The grounds are as built out as the anticipation for the event has been built up.

University Ridge did a lot to get the course here to what it is – big game ready. You’ll notice on TV the wide-open, cleared out bunkers, lines of beautiful sight everywhere, few thickets of trees, and fairways that catch and stretch more balls. Sounds fun, doesn’t it?

And it is. If special privileges make a particular golf round more appealing (and rewarding), consider this: This is where the Wisconsin Badgers play. This is where the PGA stars play. This spectacular round costs less than $100 to play. That’s right… you, too, can walk in the footsteps of Champions, take the shots they take, and make the ones they miss. (Ha Ha) You can play University Ridge this summer. Welcome to the land of opportunity.

Follow @amfamchamp and @StrickerFNDN on Twitter and/or go to www.amfamchampionship.com for up to the minute participant and statistical updates. 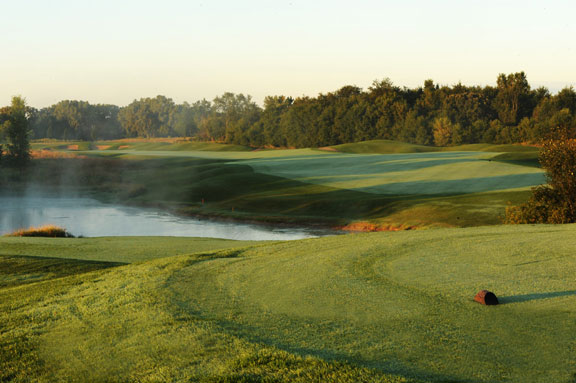