As the Solheim Cup approaches, young girls on both sides of the Atlantic focus on the American Junior Golf Association (AJGA) points list. Each aspiring golfer is attempting to move up the points list to secure a spot on the PING Junior Solheim Cup Team. The PING Junior Solheim Cup, held in conjunction with the Solheim Cup, features the 12 best female junior golfers (ages 12-18) from the United States against the 12 best junior girls from Europe. Some of these young women breathe a long sigh of relief as they scan the list. Their anxiety has ended, their play in AJGA events over the past two years have secured their position on Team Europe or Team USA. Others girls wring their hands between practice shots hoping that their recent play in AJGA events will convince Team Captain, Former LPGA Tour player Alice Miller, to select them as a Captains Pick.

The AJGA has developed a point system that ranks young golfers, girls and boys, based on their respective finishes in AJGA Tournaments.

The anticipation continues! “If I make the Team who will the Captain pair me with? Do I have the skills to be trusted in Foursomes? What are the weaknesses in my game that I must improve to insure victory?”

PING Junior Solheim Cup is modeled in the image of the Solheim Cup. The biennial event is staged during Solheim Cup week (August 14-20). The team match play event includes: Foursomes, Four-Ball and Singles matches played over two days and rotates between U.S. and European host sites coinciding with the Solheim Cup.

For the first time in Solheim Cup history, the venue for both matches will be the same golf club. With 36 holes, Des Moines Golf will host both the PING Junior Solheim Cup and the Solheim Cup at the same golf club. Each competition will have its own unique 18-hole golf course. (Each of the two courses is a blend of the North Course and the South Course at Des Moines Golf & Country Club.) Monday through Wednesday golf fans will want to wear very comfortable shoes as they race across the 475-acre property attempting to catch all the action – PING Junior Solheim Cup action on one course and Solheim Cup practice and exhibitions on the other course. The junior version of Solheim Cup will be contested on Tuesday and Wednesday while the main event will run Friday, Saturday and Sunday.

The girls who qualify for PING Junior Solheim Cup know that the AJGA has proven to be a feeder system to professional golf, both men and women. Participation in AJGA events is a junior version of the real thing, playing professional golf.

Lexi Thompson, who may become the LPGA’s version of Tiger Woods, won as a PING Junior Solheim Cup player. Her great play, especially in LPGA Majors, can be traced back to the experience gained in international play. With the final points tally still days away and two LPGA Majors (with double points) prior to the deadline, it appears that PING Junior Solheim Cup alumnae Stacy Lewis and Jessica Korda will earn a roster spot on the 2017 Team USA. These two crowd favorites who achieved success, as Junior Solheim players will bring the girl next door look to the Iowa farmland.

If Team USA Captain, Juli Inkster, believes that experience in international match play is valuable, she will select Allison Lee as a Captains Pick. Allison has the most extensive experience representing Team USA in PING Junior Solheim Cups in 2009, 2011 and 2013, all winning teams. Lee also represented Team USA in the Junior Ryder Cup in 2010 and 2012, both Junior Ryder Cup Teams won. If experience is a teacher, give Lee the edge.

Four alumnae of AJGA Tournaments have gone on to represent Team Europe as professionals in the Solheim Cup. They include Carlota Ciganda, Caroline Masson, and Melissa Reid. Anna Nordqvist, the big Swede who attended Arizona State, carried the European colors from PING Junior Solheim Cup to the main event. At the Solheim Cup in 2013, Nordqvist won her alternate shot match with Caroline Hedwall with a hole-in-one at the 17th hole, beating Morgan Pressel and Jessica Korda 2&1 during the Saturday morning session. This was the first hole-in-one in Solheim Cup history.

For American golfers match play is an unusual format. But when Foursomes and Fourball are included in Team Match Play International events, the experience gained in PING Junior Solheim Cup can only help prepare for the big event in August. First time players in Foursomes seem to lose focus when playing every other shot. In every match golfers feel the added pressure of not letting down their teammate. 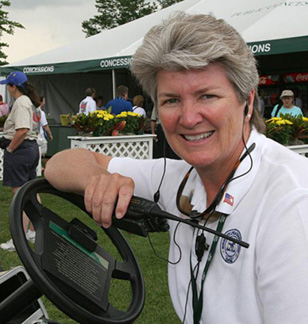 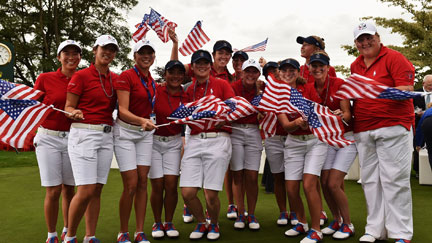