The 2017 Solheim Cup got off to an explosive start! With the juices flowing and hearts pounding, Lexi Thompson hit the first shot for Team USA. As the thousands of fans who surrounded the 1st tee screamed in admiration, the powerful Thompson drilled a 3-wood onto the green 307 yards away. Just moments later the roar from the throngs who surrounded the first tee could be heard throughout the entire golf course as Cristie Kerr drilled the 10-foot eagle putt dead in the center of the cup. Team USA 1-up!

That opening scene set the tone for three days of great golf.

Fans from both sides of the ocean clapped until their hands were raw as players on both teams made golf look easy. U.S. fans thought Lexi was long until they witnessed 18 year old rookie Angel Yin hit tee shots well over 300 yards. One of her blasts was measured at 340 yards. Clutch putts by veteran Paula Creamer and rookie Danielle Kang proved that perfect greens complement great putters. A holed bunker shot by Cristie Kerr just added fuel to the growing fire of admiration.

Lizette Salas proved that she had a place on the golf course by making clutch shot after clutch shot. She quickly became a fan darling. The willowy Michelle Wie was not at her best during the Solheim Cup Matches, but golf fans in West Des Moines continued to show their support for the Tiger Woods of women’s golf.

The successful Solheim Cup Matches put Des Moines, Iowa on the world map. Prior to the Solheim Cup many American golf fans could not find Iowa on the map. Golf fans from around the world might not have known that Iowa was a state. Those days are over. Fans who attended were overwhelmed by the beautiful city and friendly people who make Iowa their home. The worldwide television audience was treated to a wonderful visual experience from this hidden gem. Fans that were part of the gallery and those who watched on TV were thrilled with the quality of golf that was on display during the Matches. The 2017 Solheim Cup will serve as the catalyst for renewed interest in women’s golf on both sides of the Atlantic.

Chris Garrett, Tournament Chairman representing the LPGA, continues to run on adrenalin as the clean up continues. The record attendance of almost 125,000 (hurt slightly by rain forecast for the Sunday action) set an all-time Solheim Cup record. The Golf Channel and NBC brought the Solheim Cup back to live television. The number of people who watched surpassed many previous records. Garrett, who is a personal friend of Team USA Captain, Juli Inkster, could not contain his excitement about the level of golf that the women on both teams put on display. “The Solheim Cup will infuse new enthusiasm into the LET (Ladies European Tour) that has lost momentum over the past few years. This week will raise the bar for women’s golf in the future,” said Garrett.

The golf course was in perfect condition. Rick Tegtmeier, long time Director of Grounds at Des Moines Golf & Country Club had the following comment, “The event, I feel, was a huge success. Every department within the club “clicked” into high gear and we all performed at the highest level in front of an international stage. I could’t be more proud of what happened and how we looked. I have my staff to thank and the 85 volunteers that came to help out. Most of those folks (superintendents and assistant superintendents) were from golf courses from Iowa. I am tired and wore out, but not beaten down. It is now time to keep our golf courses in pristine condition for our membership.”

In was Tegtmeier who oversaw the renovation of the only Pete Dye golf courses in Iowa. Since DMG&CC hosted the 1999 USGA Senior Open, the golf club has spent millions to update the entire 36-hole complex. Pete Dye returned to one of his first golf course designs and put all his experience to use as he updated the golf course to fit modern players and equipment.

To quote Tournament Director, Suku Radia, “The Solheim Cup was a great success. The success was the result of great teamwork.” Radia was speaking for the membership of Des Moines Golf & Country Club who put the time, money and collective focus into the Solheim Cup.

Major golf events have become a made-for-television entertainment product. The 2017 Solheim Cup was a perfect example of what organizations that sponsor these events are looking for. The huge gallery provided an entertaining look at the fan side of the sport and the golf course was a tribute to those who work so hard before dawn, but drama is what creates big time entertainment.

The 2017 Solheim Cup matches provided that drama. With Team USA taking a comfortable lead into Sunday’s Singles Matches, fans clicked on their TV sets, at 9:30 CST, to see a leaderboard covered with blue in the lead on most matches. Golf fans minds flashed back to 2015 on Sunday morning in Germany when Team USA, inspired by the Patterson “not a gimme” controversy, charged past Team Europe to take back the Cup back to U.S. soil. Would Team Europe flip the table on the USA?

The lead match featured two of the worlds best players, Lexi Thompson for the USA and Anna Nordqvist for Europe. After four holes, America’s horse was 4-down. Shock rolled across America. Could we lose the Cup? Fans stopped eating breakfast to watch the drama. Church attendance fell as families gathered around their flat screens to soak up the drama.

In the end Thompson came storming back and the overall strength of the U.S. Team stitched together by Juli Inkster prevailed. The U.S. fans let out a collective smile as The Pink Panther flashed that huge smile with a winning fist pump. The balance of the matches was only for the final score of 16 ½ to 11 ½. The drama had ended; Team USA had retained the Cup.

Today true fans of women’s golf are making reservations at Gleneagles in Scotland, the home of golf. Tickets are already on sale for the next version of the Solheim Cup. With LET already feeling a resurrection with new management, Europeans rest their hopes on the team that was filled with rookies in 2017.

Let the hype and jawing began!

Chris Garrett will have little time to rest and enjoy the results of four years in Des Moines working on this Solheim Cup. Early in 2018 Garrett will move to Toledo, Ohio to begin preparations for the 2021 Solheim Cup Inverness Club. This storied venue will be seeking ways to make the 2021 show bigger and better than the show in 2017. If they do exceed the venue and drama of 2017, golf fans will be the biggest beneficiaries. 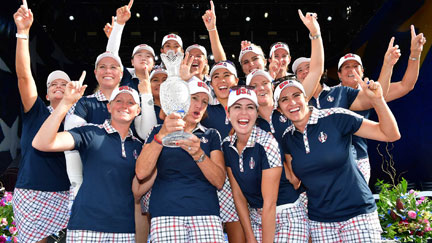 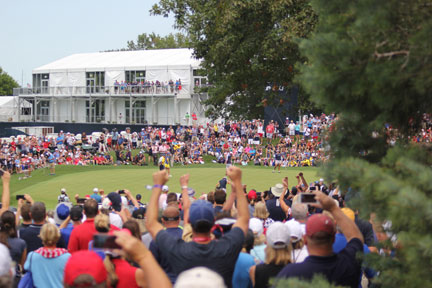