What do you get when fantasy and reality collide? A golf story. I first visited Trappers Turn in 2010, with the intention of just playing 9 holes. (Fantasy.) You see, they have three nines – three incredibly diverse sets, designed by U.S. Open Champion Andy North and world-renowned architect Roger Packard – but I only had about three hours of morning to golf. The afternoon was booked for water parks with the kids. I asked General Manager Patrick Steffes which nine was the best. He smiled and replied, “Depends on what you like.” “Beauty,” I replied, “The more wow factor the better.” Patrick nodded. “That doesn’t really narrow it down,” he said. (Reality.) “They’re really all that beautiful?” I asked. “I think so,” he replied. (Of course, the General Manager would say that.) “Tell you what,” Patrick added, “pick one, and play it. If it doesn’t impress you, I’ll let you play another nine.” (An offer like that, he must have mistaken me for Aaron Rodgers… Fantasy.) “Thank you,” I said, “but I only have time for nine.” “Okay,” Patrick replied, knowingly. He knew something I didn’t yet know. Playing nine holes at Trappers Turn is the golf equivalent of “entrapment.” You can’t walk away after nine. Like it or not (intended or not) you’re going to feel compelled to play more. (Reality.)

I played nine holes – The Canyon Nine – and when I came back in Patrick asked me what I thought. “That was awesome,” I said. “Plenty of wow factor.” “Too bad you don’t have more time,” he replied. (Hmm… the waterparks are open really late in the summer…) “I could probably squeeze in nine more,” I said. (The first nine went so fast.) “How much to add another set?” “Where are you staying?” Patrick asked. “The Kalahari,” I replied. “No charge, then,” he said. “Seriously?” “Yeah,” he nodded. “With the stay and play package we (currently) have with them, you normally would only pay for nine… and can play all 27.” (WHAT?!) The package prices have changed a little bit since 2010, but there are always great deals and (depending on how you look at it), you’re either getting a steal on your stay at The Kalahari, or a steal on the golf. I’ll take a steal on golf any day!

Long story short, I played all 27 holes that day, and only paid for nine. I learned plenty on that visit. (And on my many return visits!) 1. Trappers Turn is cleverly named, for how it snares you, and never lets you (or your heart) go. 2. Patrick Steffes is a brilliant and straightforward man, who really knows how to operate a first-class club and keep guests happy (and coming back). A lot of clubs talk about “above and beyond” service. Trappers Turn delivers. (Even if you aren’t Aaron Rodgers.) 3. The value in the Stay & Play packages with Kalahari Resort is/are incredible. And… 3b. To elaborate on that point… when you experience all three nines at Trappers Turn, AND explore all the indoor and outdoor thrills and amenities at Kalahari Resort, there’s a good chance you and your family might ALL agree on the best place to go for a Wisconsin Family Vacation.

The truth of the matter is, there are four top-tier water park resorts in Wisconsin Dells. Of those four resorts, only two have top-tier golf courses. Kalahari is one of those resorts. Trappers Turn is one of those courses. That should tell you all you need to know about where you should Stay & Play. Nonetheless, here’s a little more detail on the resort.

Kalahari has an indoor water park with 125,000 square feet of “wet and wild,” with bodyboarding, coasters, raft rides, lazy rivers and splash zones. Cabanas are available for rental and there’s plenty for every age to enjoy. Unique to the other major golf resorts in the area, Kalahari has an indoor theme park as well, with another 100,000 square feet of fun. There’s a six-story Ferris wheel, a carousel, the best indoor ropes course in the area, a laser tag arena, bowling, mini-golf, go karts and much more. Kalahari’s outdoor Zambezi Water Park is loaded with more slides and rides, more splash zones, sports zones, pools and adult chill areas with cabanas and TVs. There’s even a new (in 2017) Smoke That Thunders ride. Kalahari ownership tries hard to stay at the forefront of amusement park innovation, and their Virtual Reality Experience “The Arena” is a game changer. Only the second such experience in the United States (up to 6 people can participate simultaneously) it is truly an “out of this world” adventure. Kalahari is bringing “Escape Rooms” to the resort, they have character dinners, shopping, an assortment of restaurants, a spa, and the resort is connected to a movie theater. You literally don’t have to leave the property to get anything you want… except golf. And even then, Kalahari offers complementary shuttles to and from Trappers Turn.

The three nines at Trappers Turn are exceptional, and I might even be understating it. I’m going to present them in the order of which I would ideally play them in a 27-hole visit. I would start with the Arbor Nine. It is the most forgiving opening tee shot of the three, and basically lets you get in a few good swings before the wow factor comes into play. There are stunning holes like the Par 3, 3rd and my two favorite holes on Arbor – the downhill 6th and essentially island green Par 3, 7th (water on three sides, sand on the other). The Arbor Nine wraps up with a great downhill approach to a green backed by water. You cross the bridge back to the clubhouse and move on to the next nine.

I would play the Canyon Nine second. I’m not going to lie, the first hole on Canyon is as tough as it is beautiful. Placement off the tee is critical, and the uphill approach is difficult, but man… is it ever pretty. As if to make up for pushing you so hard on #1, the next five holes on Canyon are great scoring holes. By the time you get to the pretty but tricky, funnel-down Par 3, 7th you should be on the top of your game. Each of the finishing holes to the nines is spectacular, and Canyon’s is similar to Arbors – a steep drop down towards water and trouble, taking you right back to the clubhouse.

I would save the Lakes nine for last, mostly because hole-for-hole I think it is the best. The opener is a stunner, across the flowery bridge alongside a beautiful watery golf ball grave. The fourth hole, a downhill Par 3, is possibly THE signature hole on the property – easily the most photographed. And Lakes ends with my favorite closer of the three nines – back alongside that watery golf ball grave from #1. All in all, I would contend that there are a dozen “signature” holes among the 27 here, and I believe the only way you can really leave disappointed is if you didn’t have time to play all 27.

Trappers Turn’s clubhouse is as spectacular as the course, and its restaurant is renowned in the area for its dinners, views and Sunday Brunches (especially the Easter Brunch, FYI). Patrick Steffes and his team have every facet of the operation nailed, and every individual and golf group is taken care of from start to finish. If you’re coming here to just “play nine”… good luck. Trappers Turn is bound to “entrap” you into playing more. 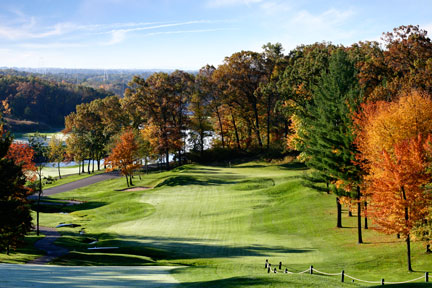 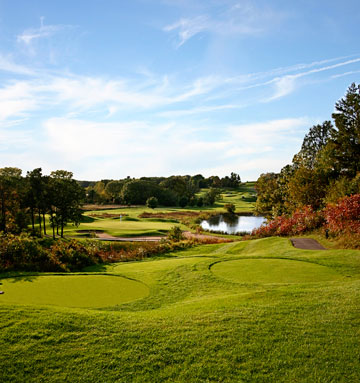