In case you didn’t know, Central Wisconsin is rapidly becoming one of AMERICA’S hottest golf hotbeds, and 2017 might be the state’s biggest golf year in nearly two decades – since Whistling Straits opened in Kohler in 1998. The more things change, the more ONE thing stays the same, though… the prestigious Golf Courses of Lawsonia have been bringing the area heat the longest (since 1930), and whatever’s bringing you to the heart of Dairyland this year, make sure you carve out a day or two to play the two tracks at Lawsonia.

Perhaps you’ve heard of the U.S. Open. It’s being hosted at Erin Hills in June, just 70 miles away. Or maybe you’ve heard Keiser’s new project – Sand Valley – is opening in May… only 60 miles away. Sentryworld debuted its newly renovated 18 last year, with the famed “flower hole.” It, too, is just 70 miles away. Or, maybe you’re merely taking the family to the Waterpark Capital of the World – the Wisconsin Dells – with no plans for golf. Umm… yeah… change those plans. (You’re only 50 miles away.) My point is this, whatever great golf or leisurely attraction is bringing you to Central Wisconsin this year, pair that getaway up with a day or two at Lawsonia. Play here… stay here… complement it with other golf if you must, but be forewarned that many of your greatest compliments will come back here, to the 18-hole loops in Green Lake. (Seriously!) I believe you’ll be no less impressed by the great golf at Lawsonia as you will be by anything else in the area… if for no other reason than the fact its Links course might be the best course you’ve never heard of. (And it’s the 85th ranked public course in America by Golf Digest!) On the other hand, if you HAVE heard of it… if you have PLAYED it… you know I’m not exaggerating. The two courses at Lawsonia, The Links and The Woodlands, are currently the best 1-2 punch of golf in Central Wisconsin.

The Links Course was built by the H.O. Stone Company in 1930 on the former farmland of Victor Lawson. It has a UK feel – very reminiscent of Scotland, in my book – and apparently that’s no accident. The architects, William Langford and Theodore Moreau, went to Scotland to do their research before designing the course. Links-style with dramatically sloped, multi-tiered greens, nearly 100 bunkers, fescue all over and deep, shaggy rough, the course has an intriguing blend of five Par 3s, five par 5s and eight Par 4s. For better or worse, the only thing lacking at Lawsonia is the ocean, and truthfully, that keeps the golfer’s focus on the genius of the course design (instead of the surrounding scenery). Not that the Links Course isn’t beautifully distracting in its own right. It’s Erin Hills with trees (though not in play) and Whistling Straits with fewer bunkers. Interestingly enough, the Links is regularly compared to Whistling Straits, but not because they’re anything alike. It’s mostly because they are two of the best courses in Wisconsin and cost about the same to be built.

Lawsonia was first made famous by hosting Ben Hogan, Byron Nelson and Sam Snead in the Little Lawsonia Open. It was more recently made famous by opening a second course, The Woodlands, in 1983. The Woodlands began as 9 holes in 1983 – nine marvelously framed holes with flowers, canyons, a Par 3 with a 65-foot drop and spectacular views of Green Lake. The other nine was added in 1991, giving Lawsonia two star-studded courses in a part of the state largely ignored by the world’s best golf architects. My, how things have changed, eh?

On the off chance you haven’t heard of Lawsonia before, perhaps this will help you know what to expect when you get here. Their parent company, Oliphant Golf, Inc. is one of golf’s most acclaimed golf management and construction/renovation companies – a “Best of” company in every major golf publication. Maybe you’re heard of another course they’ve worked on – Pebble Beach. (Yeah, that Pebble Beach.)

“To best experience the greatness (of Lawsonia),” PGA Head Professional Josh Carroll says, “you really need to play both courses. They couldn’t be more different or similarly great.” (Well said.) The Links Course begins with a phenomenal starting hole – the phenomenal part being an elevated green you have to see to believe. Langford & Moreau did a spectacular job with the many raised greens around the entire course, but #1 and the Signature Par 3, 7th hole – “The Boxcar Holes” are truly hard to believe. (Legend has it, there’s an old railway boxcar buried under the 7th green.) The drastic slopes and speeds of the Links greens puts a distinct emphasis on short games skills – approaches from inside 100 yards, chipping and definitely putting. And the bunkers… man… do not expect to advance your ball very far out of most bunkers – fairway or greenside. A couple things to note about The Links: 1. There is no Par 4 between the 8th and 15th hole and, 2. The only completely wooded hole on the course is the awesome Par 3, 14th. Your mind is reeling, isn’t it? It’s definitely a see-it-to-believe-it and play-it-to-appreciate-it kind of place.

The “other” course at Lawsonia is the scenic Woodlands. If it’s cliché to say that two courses on the same property couldn’t be more different then this is as cliché as it gets. The Woodlands is all trees, and all kinds of beautiful. There are a number of holes here that will draw your camera (or cell phone) out for your social media walls. The first is the second, a two-shot short Par 4 over a quarry towards a stone observation tower. When this hole is in full bloom, stunning becomes an insufficient adjective. The Par 3, third hole features the aforementioned 65-foot drop alongside Green Lake, and another Par 3 (#6) is my favorite hole on the course, with a large pond and waterfall-fed brook protecting the green. I love the beastly Par 5, 7th as well, but then this whole nook of the course is sensational. There are a lot of tough golf shots to be made on The Woodlands, but you can do it, and when it’s all over, you’ll be so thankful that you did.

Post-round, Langford’s Pub, (named after the architect of The Links) is a popular hangout, especially on the weekends where their Friday Night Fish Fry is an award-winner, and the line can go out the door on Saturday nights when people drive in for restaurant manager “Chef Rocky’s” famous Prime Rib. If you’re extra lucky, you’ll get a beautiful night, and can maximize the dining experience by sitting out on the deck, overlooking the course.

Lawsonia does offer Stay & Play packages. They have two houses on property, Birches and Dawson, that can accommodate 12 people, each. The Dawson House has 12 single beds in three bedrooms with a full kitchen and screened porch. The Birches House also has 12 single beds in five bedrooms. You can stay in the newly renovated Moreau Lodge with three 2BR suites and one 1BR suite or in nearby Green Lake, where Lawsonia works with other area hotels for some special deals.

Reflecting on the point I was making at the beginning: Few golfers come to Central Wisconsin (for the first time), with playing Lawsonia as their top priority, but few golfers who play Lawsonia (for the first time) leave here anything less than mesmerized… with anything less than absolute raves to share. Remember the name. (Every golf publication in America sure does.) 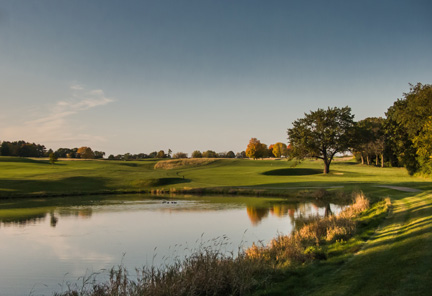