A Pro’s Insights On Improving This Winter

As the 2019 golf season winds down I propose this question, “What can you do to become better once the leaves have fallen, the frosty pumpkin is now, well frosted, and the golf courses will soon be closed up here in the Netherlands or anyplace north of the 45th parallel?”

Focus on one thing over the winter to change! I want to be better at putting, I need to be better at hitting my wedges 100 yards, or work on finding that extra ten yards! In my earlier days I was lucky enough to work with my great friend and teacher Larry Nelson at the Braemar Golf Dome. One year, after some discussion and analyzing, we decided on changing my left grip to be stronger. Something as simple as that minor change has compounding effects upon the results of your swing. But I knew it was something that Larry and I needed to work on. I was blessed that I had the time, energy and financial wherewithal to focus on that change during October through March. So once the snow melted, and I was able to get out in April, I felt comfortable with my change, and recognized through trial and error inside at the dome with a watchful eye, how that change my affect my driver/irons/wedges.

I was lucky enough to win the Minnesota State Amateur that year at Interlachen Country Club. A few years later I recognized one of my weaknesses was the inability to hit 100-yard wedge consistently. I worked tirelessly hitting into buckets and flags at the dome. Larry and I set goals to hit either the bucket or the flag from 40 yards, 60 yards, 80 yards and 100 yards before I was done practicing. Again with that focus over the winter I became one of the best wedge players and have been even to this day.

Technology has now advanced indoor golf simulators and the usage of Trackman types of computers will allow you to understand exactly how far your ball is going and even trajectory, spin rate, etc. That’s the fun part of being in modern golf; we can play all year long albeit not on green grass.

I was an average putter even though I was winning. I recognized once I became a professional that these guys were pouring the ball in from 10 to 15 feet. I was solid 5 feet in and great at lag putting. But I also recognized that if I was going to move up – the only way I was going to get better was to focus on my technique over the winter. That next year, after qualifying for the European Senior Tour, somehow I was ranked in the top 15 in putting.

So in conclusion – figure out what you need to work on. Develop a plan with your PGA instructor and work on either your weakness or the one part of your game that you know needs the most attention for you to get better. Sometimes it can be something as simple as a grip change, sometimes it’s something as difficult as needing to work out and get your body posture better.

Recognize your weakness, turn it into a strength and I’ll see you next year when you’re a much better player! 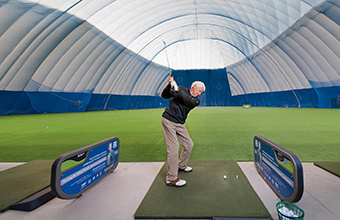