Don Berry won his 10th Minnesota PGA Professional Championship with his win on Tuesday, August 27 at The Preserve at Grand View Lodge.

“I’ve always done ok, like the last couple of years qualified for the National Club Pro, but it’s more like, you know, third through sixth place, never really in the hunt to win, so I wasn’t sure if I was going to win this thing again, and obviously this feels great to do it.”

Berry did more than ok in a first round riddled with long rain delays and soggy course conditions. The field of 98 contestants was scheduled to play in morning and afternoon waves, but after almost two hours into play for the morning wave, the rain was too much for the course to handle and players were called in. Fortunately for Berry, he was slated in the afternoon group.

“I didn’t start yesterday, so it wasn’t that bad for me. I mean, I was in the hotel until 2:00,” Berry said. “I never thought we’d finish this tournament, I mean I really didn’t. Vincent [Bachteler] and the guys thought we would and we got it done, with time to spare.”

The first round resumed on Monday at 4:00 p.m. as a shotgun start for all players. After a rain cell moved through around 6:30 p.m., play was suspended for the day and scheduled to start again on Tuesday morning. Most groups had a remaining 12 or more holes to play. Berry finished the round in fifth place, just two strokes behind clubhouse co-leaders Jeff Sorenson and Brent Snyder, who lead with at 68. Eric Chiles and Jonathan Reigstad were tied for third place at 69.

Round two started out well for Berry, who made 3 birdies on the front 9 and was bogey-free. Then, on holes 13 and 14, what Berry said he thought were the easiest holes, he went bogey-bogey.

“You know, you’re going to make bogeys on a day like this, but I felt like I bogied two of the easiest holes, and you’re coming down the stretch and then you got a hard hole 15, I think is a real hard hole, so I just tried to calm myself down and said ‘hey I’m playing good’ and got it back together a little bit.”

Berry went on to par the final two holes and it was enough to keep him in the lead and finish at -5 for the competition. Behind him tied for second place were Jeff Sorenson, Eric Chiles and Scott McDonald all at -2, Brent Snyder and Bill Israelson, who won his sixth Senior Section Championship just two weeks prior, were tied for fifth at -1, Mike Barge, Jesse Nelson, and Corey Johnson were all tied for seventh at even par.

The Minnesota Section is granted eight spots to the 2020 PGA Professional Championship scheduled to be played April 26-29, 2020 at Omni Barton Creek Resort and Spa in Austin, Texas. Mike Barge, Jesse Nelson, and Corey Johnson conducted a playoff to determine who would fill the last two spots. All three made par on the first hole, then Nelson and Johnson also made par on the second hole. Barge would 3-putt for bogey to give the final spots to Nelson and Johnson. 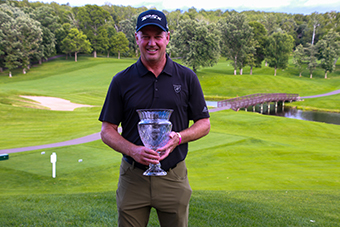