It was the third day of the annual golf adventure for the Fab-4, a gang of former college golf teammates. During their freshman year their coach once referred to the group as the Fab-4 (comparing them to the Michigan freshman who nearly won the NCAA Basketball Championship). The name stuck. They carried that monkey on their back for the four years of college competition. During their senior season they almost achieved what the real Fab-5 could not. Their dream of a conference championship almost came true.

Believe it or not, it had been 15 years since that SOB from that private Catholic school holed a wedge from the fairway on the final hole to rob the Fab-4 of their long dreamed of conference championship. Each year when the Fab-4 meet to play golf for three days, they referred to that shot as the “Eagle From Hell.”

Over the years, the Fab-4 had journeyed east to Wisconsin to play the wonderful courses that have been developed in the last 35 years. They had been to North Dakota to play the courses that Mother Nature designed. But, their favorite golf trips are to go up north to play the variety of great Minnesota courses that had become so familiar.

On this final day the Fab-4 had an early morning tee time so they could return home in time for dinner with their families. On the 16th hole Billy, the team captain and still the best player, was addressing his approach shot of about 160 yards from the rough on the right side of the fairway near a small lake. A shadow crossed in front of him. As he tilted his head back so the brim of his golf cap did not obscure the view, an immature bald eagle with a still squirming fish in its talons flew overhead. The Fab-4 could feel the fanning and hear the sound created by the six-foot wingspan.

The giant bird with only a few white feathers landed in a tree near them. It was as if our Fab-4 had a front row seat at a rock concert, the eagle was only a few feet above them. The group sat mesmerized in their golf carts as a powerful talon held the 18” walleye to the tree while the eagle shredded the fish.

For a few minutes the Fab-4 sat motionless. Then slowly Billy moved to his cell phone while he whispered, “I am going to see if I can get a shot of this scene directly from National Geographic.”

The Fab-4 went completely unnoticed by the young eagle. Then Buck quietly said, “Billy, see if you can get a good video of this eagle having a walleye lunch.” Billy flipped his iPhone camera to video and shot the video.

Buck said, “I can’t believe that we can actually hear the bones in that fish crunching as that eagle crushes them in his powerful beak. This is the reason I love to play golf in Minnesota, you never know what element of natures wonders you will witness.”

The group behind was pushing the Fab-4 so they continued on with their round while the eagle had dessert.

In the grill over lunch and a few frosty mugs of Alaskan Amber, the Fab-4 re-watched the eagle having lunch. Suddenly, Charles, the honor student and historian, said, “God let us witness that eagle for a reason. I believe that that young eagle with his feathers just starting to turn white is the great, great, great grandson of the Eagle From Hell.”

No one laughed; all got somber. Each member of the Fab-4 was replaying in his own mind that wedge shot hit by that SOB from that private Catholic school. The Eagle From Hell that robbed the Fab-4 from their four-year long dream of a conference championship.

“Send us all a copy of that video,” said Charles. “Also send one to coach. He is retired, but he will enjoy seeing that relative of the Eagle From Hell who robbed us all of our conference championship.”

“I got the bill,” Billy said. I birdied that hole where the Eagle From Hill tormented us. I stuffed it up his A$$.” 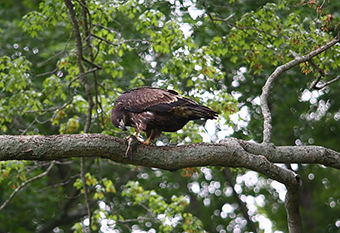