PEOPLE move the needle in golf, from property developers to the course architects and the people who play them, BUT… people like me won’t move far to play a course lacking good photography on its website. In fact, MANY of us base our “bucket lists,” and create our golf trips, on courses whose pictures have wowed us… the better the pictures, the more we want to play those courses. That’s where guys like Evan Schiller and Brian Oar come in, two of the most talented golf landscape photographers on earth. These guys can make a mediocre course look like a “must play” and a “must play” course look absolutely heavenly (WITHOUT PHOTOSHOP). Camera phone experts like myself can’t hold a candle to these guys, no matter our talent or eye, and my walls are lined with Brian’s framed photos and Evan’s incredible Golf Calendars.

These guys love what they do, and their mutual respect is awesome, but their job is tougher than you think, and they both had some great stories to tell:

How many golf related pictures do you take in a year? Non golf?

Brian: Over 90% of my photography is golf-related and I’m well over 10,000 shots this year… not including video or drone footage.

What are some of the worst things that have happened in a photo shoot?

Evan: The propeller flew off my drone in Arkansas and my wife had to FedEx the backup overnight. Expensive! I also drove 3.5 hours to a New Jersey course only to find out that a tornado had ripped through the property and taken out trees and building everywhere. Didn’t shoot that day.

Brian: I crushed my foot between a rock and a golf cart in Oregon five years ago – broke my foot in the middle of the golf course and could hardly move – and snapped a $2,000 lens in Park City, Utah. The lens I replaced. Still have the same broken foot. (Sigh)

What are the biggest challenges you face as a photographer?

Brian: Weather and fatigue present constant challenges, and you always have to be paying attention to the light not just where you are but everywhere around you. Our niche is changing with social media too, forcing us to adapt to changing equipment and mediums while trying to maintain some sort of profit.

Evan: The coordination, preparation, traveling and weather present the biggest challenges. The more preparation I do in advance, in terms of coordinating with the superintendents, managers and golf staff and trying to anticipate problems, the better the shoots seem to go. Unless weather interferes – weather is out of our hands.

What are the biggest rewards of being a golf photographer?

Evan: Being outside in essentially beautiful parks… the privilege to travel to so many amazing places… and, of course, getting that shot or set that the clients love and can use to market. I LOVE the creativity of it all – the scouting, imagining, shooting and final production.

Brian: I love seeing early light on golf courses and shooting in the late golden hour – it’s good for my soul, I think. I also LOVE playing golf, so getting to visit and play some of the greatest courses in the world is a pretty cool perk.

There is SOME luck in getting a perfect picture… any particular instances you can think of where you were “right place, right time?”

Evan: I can think of one years ago at Ballyneal in Colorado. Between storms I ventured out and caught a small break in the clouds as the rain and lightning approached – 30 seconds of light was all I got, just enough for that one picture.

Brian: Sometimes on the cloudiest of days right before sunset the sun will crack through like it did for me at SkyWay Golf Club in New Jersey – I was packing up my gear after hours of nothing when a small set of rain clouds split and lit up the SkyWay Bridge and golf course like it was on fire!

Who is one photographer that YOU really appreciate and respect?

Evan: David Cannon, regardless of what he shoots. I find his every image compelling.

Brian: Peter Lik is one of my favorite photographers, but he doesn’t do golf.

What is your favorite camera and how much did it cost you to fully equip?

I’m glad you both brought up the drones. How have drones changed golf photography for better and/or worse, and what do you appreciate about them?

Brian: We used to need a helicopter to shoot what we can shoot from the ground with a drone now. We can fly them into the tightest of locations, no lifts necessary. The downside is hundreds to thousands of people are flying them now and taking shots we couldn’t take before – it’s just really opened up the competition to amateurs.

Evan: Drones are a real game changer. We used to need lifts and creative setups to get shots from unusual angles. Now we can get any angle anywhere. The problem is the number of people who fly drones without any license or authorization. Incidentally, and bizarrely, the only ones required to have licenses to fly drones are the professionals – should probably be the other way around.

What is a crazy story you have of an experience with a drone on a photo shoot?

Brian: Something went wonky on one drone in Borrego Springs, California in really windy conditions, and I had to land it on a busy road then race to it (miles away) in a car all the while hoping it wouldn’t get smashed. It didn’t.

Evan: I’m not sure what it is about seagulls and drones, but a few years ago while shooting the 7th hole at Pebble Beach one particular seagull kept dive-bombing my drone every time it took off. I had to keep landing it because he would NOT leave it alone. Someone could have captured a hysterical video of the seagull chasing that drone!

You’ve both been featured in MANY magazines around the world. Do you have a favorite cover or feature you’ve been a part of?

Evan: My photo of the 7th hole at Pebble Beach was featured on the cover of the 2010 U.S. Open Magazine – a picture I’d taken the year before during the briefest burst of good light. I was also featured in a Met Golfer (NYC) story on golf photographers. The picture they showcased was a two-page spread of me TAKING a picture of that 7th hole at Pebble Beach, a shot actually taken by my wife – “The Photographer’s Photographer.”

Brian: Golf Digest featured my hometown course of Sand Hollow in a 6-page spread of my photos last year, and The Golfer’s Journal is always great to work with, producing some amazing quality spreads of my shots at The Loop (Michigan), Quivira (Mexico) and Streamsong (Florida).

Evan: Of course. My top five would be Tara Iti, Cape Kidnappers and Kauri Cliffs in New Zealand, as well as Barnbougle Dunes in Australia and Loftonen Links in Norway.

Brian: If I had to pick I’d say Whistling Straits in Wisconsin, The Bad Little Nine at Scottsdale National, Augusta National just because, and pretty much anywhere in Ireland (one of Evan’s favorite places to shoot).

I’ve had the privilege of traveling with Brian MANY times to spectacular golf destinations (Scotland, Lanai, Bandon, etc.) and have spent dozens of hours on courses with him, as a player model, apprentice and co-photographer. I’m always mesmerized by his patience and skill, and have the deepest of appreciation for how much effort he puts into making every single shot as perfect as he can. Evan…since I ordered his first golf calendar years ago, it’s been a dream of mine to travel with him – the man’s talent is absolutely astonishing. One of these days! Check out their respective websites if you have a minute – BrianOar.com and EvanSchillerPhotography.com. They will almost literally blow your mind! 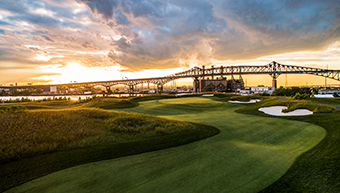 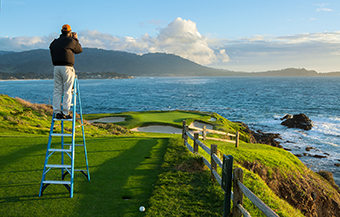