Over the course of the golf season, each month in this column we will be sharing ideas to help improve your golf game without changing your golf swing. We will talk about things like efficient practice methods, equipment, course management and new technology. By implementing our advice each month, you will see improvement in your game and lower scores.

Pace of play has been a hot topic of debate over the last couple of months on the PGA TOUR. Awareness of the pace of play has become so much more prevalent at the elite level with the ability to watch early round coverage, featured groups on PGATOUR.com, and the game’s best players like Brooks Koepka, Rory McIlroy, and Justin Thomas calling slower players out over how they move around the golf course.

While incidences of slow play on the PGA TOUR are a concern because of the trickle-down effect that it has on everyday play, slow play in the amateur game and at your local golf course is a major hindrance to the game of golf. One of the biggest things that keep people from playing more golf in the amount of time it takes to play.

Slow play not only effects people’s perception of the game and their desire to play, it also impacts how well they play. The biggest influence on pace is what happens in between shots. How you move from shot to shot and especially the time it takes to execute a shot.

A great way to maintain an acceptable pace and to enhance your chance to play well is to have a time efficient pre-shot routine. The purpose of a pre-shot routine is to increase commitment to the shot by creating a positive image and feel for the shot and eliminating any anxiety. Doing this increases confidence and consistence.

An effective pre-shot routine would have three steps.

Gather Information – This includes the yardage, the lie, wind direction, and any elevation changes. This is the time we make our club select and mentally determine the shot to be hit. This step should start before we ever arrive at the ball and while others in our group are preparing or hitting their shots. This phase of the pre-shot routine has a big impact on a player’s pace.

Pre-Swing Phase – This step includes visualizing the flight of the ball and merging the visualization with the feel of the swing to create the desired shot.

Swing Phase – This is the process of executing the shot. Once you step into the shot, you should have continuous and rhythmic movement and positive visualization and mechanical swing thoughts. The PGA TOUR allows 40 seconds for this process in their pace of play guidelines. In our daily play it should take less time.

Top 100 Teacher Mike Bender in his research for “Golf’s 8 Second Secret” studied every player that had won five major championships or more. One of the relationships between all of these champions was that the Pre-Swing Phase took 12 seconds or less and the Swing Phase took a maximum of 8 seconds.

If golf’s greatest champions incorporated these elements into their timely pre-shot routines, making it part of our play with give us a better opportunity to shot lower scores and to increase our pace of play. 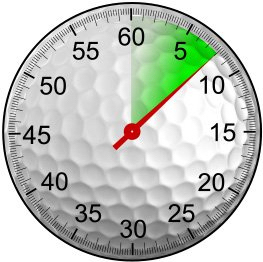