Tornadoes On The Golf Course

I know that a tornado is not a Critter. But tornadoes are definitely a part of life on a golf course. Therefore, for this story, I will use my author’s license and call a tornado, a Critter on the Course.

At a recent MGA Senior Tour event at The Ridges at Sand Creek, the participants were ushered into the basement as a tornado was in the area. No more golf that day.

As golfers we have learned to endure almost everything from Mother Nature. Lightening is the most feared of Mother Nature’s weather phenomenon. The weather facts tell us that on average five golfers are killed by lightening on a golf course each year.

Another fear for course operators is large hail. Hail strips leaves off trees, destroys beautiful landscape flowers and creates a million ball marks like deep dents into the rain softened fairways and greens.

But the one weather event that scares the CRAP out of course operators is a BIG WIND. Big wind includes wind shear, a straight-line wind, hurricanes (only in coastal areas), and tornadoes. The magnitude of the destruction from big wind is devastating to course operators.

I first observed the affects of a tornado to a golf course when I was about 11 years old. The course was in El Dorado, Kansas. My mom and dad had both grown up in El Dorado and most of our extended family still lived there. A major tornado made a direct hit on El Dorado Country Club. My older cousin worked summers at ECC.

The first thing that I remember, from over 60 years ago, was all the transplanted, and now mature, trees that defined the fairways on this prairie golf courses were either, up-rooted, snapped off or devoid of leaves and small branches. The membership volunteered and assisted in the clean up and had most of the debris on the fairways picked up when I saw it. El Dorado was in the heart of farm country with many metal grain storage buildings. There were still plenty of twisted scraps of metal littering the rough between holes and scattered across the prairie.

El Dorado was an oil boomtown, much like North Dakota is today. The only difference, the oil in southeast Kansas was near the surface. That fact made drilling easy and inexpensive, but it came with a price – crude oil naturally seeped into most creeks and small ponds. The pond that defined several holes on ECC had an oily slick on the surface. Sunlight that reflected off the surface created a variety of rainbow patterns. The upward suction of the tornado sucked most of the water from the pond and deposited a mist of oily water over a half-mile wide area of south El Dorado. Nothing but elbow grease would clean this film from the buildings.

My cousin took me to play golf on the now open golf course. When we got to hole #3, he showed me where the force of the tornado had driven two pieces of barbed wire fencing completely through the two foot diameter of a still standing tree trunk. The power must have been incredible.

The golf course was never the same!

Last year there was a tornado strike on a course in Colorado where a golf cart with two riders was picked up and spun around, like Dorothy in the Wizard Of Oz, then spit out with the riders still in the cart. Major injuries, but no deaths.

Last fall on the Gulf Coast Hurricane Michael, a Category 5 storm, made a direct hit on Panama City. My wife and I spent several days as volunteers helping people who had nothing left. Each day that we made the 40-mile drive to Panama City we drove past Hombre Golf Course. The Hombre was home of three nines: The Good, The Bad and The Ugly. The destruction was so devastating that the owners decided to abandon the golf course and sold the property. Due to Michael, golfers will never again experience The Ugly, one of the hardest 9-holes I have ever witnessed.

The moral of the story… when tornados are in the area, seek shelter. 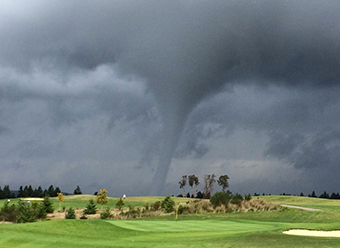