One Men’s League evening in 1996 I took a ride around the course to see what was going on. Though we had Rangers on both nines… there were four foursomes waiting on #6 tee box. We had a problem with pace of play.

Many years before that, when I was in college we used to play at Meadowbrook on Saturday mornings. During those rounds, when we hit hole #4 it was usually backed-up. I’m talking four to even six groups waiting at the tee box. I figured it would be 45 minutes before I would tee off, so sometimes I took a nap… remember – those were my college days and those Saturday mornings were wobbly.

However, most of us don’t want to take naps while we wait on a golf course. Most of us don’t enjoy getting stuck in traffic jams either. As I’ve said for years, a four hour round of golf is like driving a car at 60mph on the freeway… it’s not fast – it’s reasonable.

I like the car analogy because it fits in so many ways with golf course pace of play. What makes it tricky for a golf course is that it’s a one-lane road. Everyone has to keep pace… otherwise it backs up the whole course. Obviously, that only happens if the course is full. I’m really proud when we keep at a four hour pace until late on a weekend afternoon. If we just lose 5 minutes per hour, then 6 hours later it’s 4 ½ hours, and it’s a subtle slowdown and hard to manage.

Rangers can only do so much. Golfers have to be aware of their pace of play – they are sharing the golf course. They paid for a tee time – they didn’t rent the whole course for themselves. That tee time is a slot… it’s a car on the one-lane road.

Last week I had a guy complain that he played in four hours. Then he said that he played a different course in 3½ hours… I asked if it was full – no, he said, it was wide open. Huh? That’s comparing apples to oranges. This guy is a lawyer. Seriously.

The main reasons for slow play are either zero awareness or narcissism. We get people who insist that they can play at whatever pace they want to because they paid a green fee. Wow. Sort of that “The customer is always right mentality.” Who came up with that one? So, a customer can throw a rock through our front window or fight with other golfers or boss people around? Mind-boggling.

A civilization requires respect. And in a business it needs to be a two-way street. The customer also needs to be respectful… otherwise it’s a subservient relationship.

I was reading an old book about civilization and culture. It said that civilization is the outer part of society and that culture is the inner part. And that if the outer part took over that the culture would die and then the society would also die – sort of if a society’s members get too into “rights” instead of doing the “right” thing. When people lose the inner guide of doing the right thing, they have to depend on rules and laws and force.

Last weekend the PGA radio station had on two college coaches talking about the Open. They both thought that Brooks Koepka was out of line for pointing at his watch while waiting for JB Holmes to hit his shots. So Holmes gets a pass for playing ridiculously slow, and Koepka is the jerk for pointing it out?

This is a big deal. Seriously. And these coaches see no problem with slow play? I thought that coaches were also mentors… helping kids grow-up. The big step into being an adult is being responsible for your actions. Sadly, I think we’ve become a society of children and when anyone points out childish behavior, then they’re the bad guy.

There’s money and power in controlling people. There’s not money and power in sending them out free and strong and responsible. If everyone is a child, then they constantly need to be told what to do. They need a Ranger to tell them not to screw-up the pace of the golf course. Or a Ranger to tell them not to drive on the greens. I could go on and on.

I don’t want to run the golf course like a police state. I expect more from golfers than the rest of society. Golf is a game of individual responsibility. And I would think that people would want to play golf in a free, relaxed atmosphere. But, in order to provide that atmosphere, golfers need to have a basic level of responsibility.

I probably sound like a crabby old guy. I’m basically not, though I am concerned about this on a societal level. I can’t run society, but I can run my golf course. The best way that I think to handle these situations is expulsion. Seriously. These people wreck it for the good people who play golf at our golf course. Why should they have to put up with slow play and rudeness? We have things backwards. We tolerate and even reward bad behavior.

Back to Koepka and Holmes. I think the PGA TOUR should warn Holmes and fine him, then if it keeps happening, throw him off the TOUR. How good would that be? And I wish other organizations would stop tolerating bad behavior. It has to start somewhere. Soon. 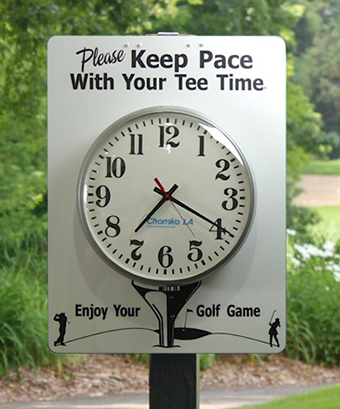