Not Everyone Can Make It In The Pro’s

So you think you can be a touring PGA TOUR golf pro!??

I love it when some of these X former athletes and soon to be retirees think that in their “next life” they will just pick up their golf clubs and play on PGA TOUR Champions.

During my nine year attempt at gaining PGA TOUR status, I came across a few former athletes including Atlanta Braves pitcher Jose Alvarez, who could really play, win a few senior mini-tour events but soon recognized he was nowhere near the level that it takes. Or Tony Romo for example he played in the 2019 AT&T Byron Nelson TOUR event and finished T149 shooting 76 and 74 for a total 150, but then goes out in the celebrity event in Lake Tahoe and consistently finishes first or second. Or basketball player Steph Curry who has been given two sponsors exemptions to a Web.com event and shot a respectable 74 and 74 for a total of 128 to finish T148 out of 154 players improving the next year finishing 106th! Not making a living with those finishes!

Arguably the best former professional to play was Rick Rhoden who had a successful 16 year MLB career. His three year PGA TOUR Champions career was cut short due to injuries, but was medalist in the PGA TOUR Champions qualifying school in 2008. (Note: I finished a extremely disappointing 31st, Top 30 got their card.) Rick won over $250,000 with a top-five and three top ten finishes including at the 3M Open.

I can’t tell you how many decent amateurs that approach 45 years old shoot 67 as their best score at their local club, never won a state event and think they can quit their job upon retirement or before and focus 100% on golf and think they have a chance.

If you went to every PGA Mon Q, shot these scores in order… you got into exactly ZERO events.

Listed above are the statistics for what it takes to qualify for the fourth spot qualifiers on the PGA TOUR. (Which I did once in my past life at the Greater Milwaukee Open in early 80s.)

I agree with the many TOUR players that claim the PGA TOUR Champions events are even harder to qualify for. That’s because besides the Monday qualifier you have to go through a pre-qualifier. If you make it through that you must finish in the top three or four against a plethora of former multiple TOUR winners and Top 100 career money winners. I was lucky once to accomplish that when I was at the top of my game. 66 at Victory Links and made it by 1!

So before you quit that job early just think about how good you have to be! You might be better to spend your time enjoying the game or maybe focus on fishing.

Quote of the week. When asked if he liked the date change, “I love it! All good dates, I picked them! Plus we already have top players committed!” Hollis Cavner on the next few years of 3M Open dates! 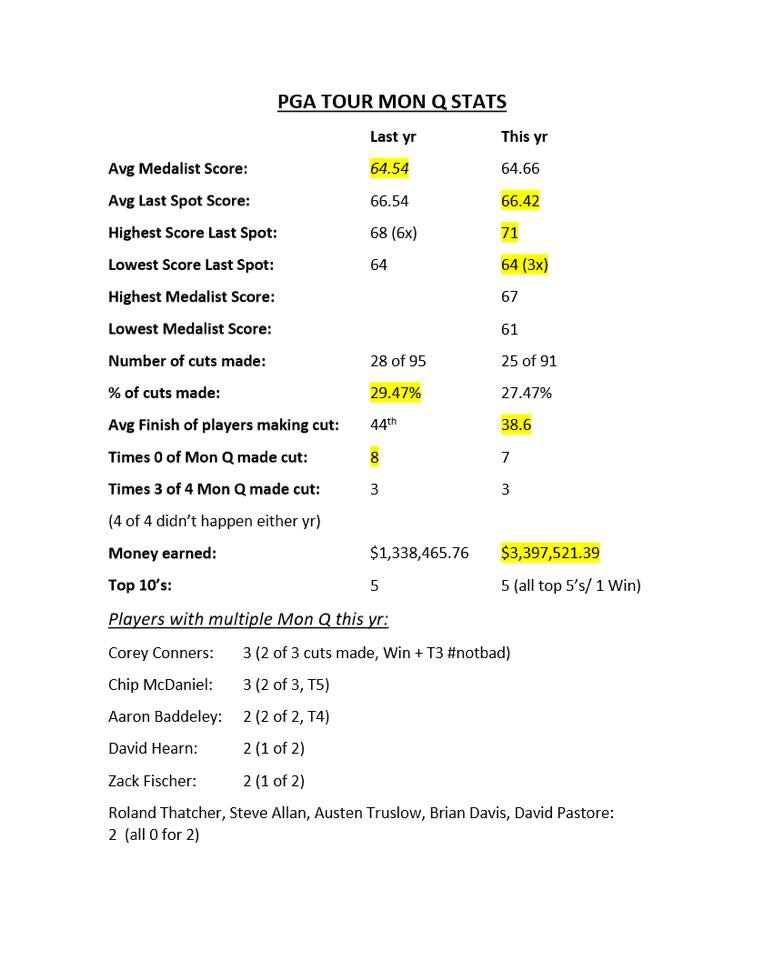