A University of Nebraska-Lincoln senior, Smith shot 75 to end round one 4-over and didn’t think she was in the running to win.

“Both days, honestly, I was not thinking I was in contention at all, so this one kind of fell in my lap,” she said. She shot 33 on the back nine both days but knocked a 42 down to a 39 on the front nine during the second round.

Smith started her second round with a bogey on holes 1 and 3, but birdied hole 4. She bogeyed 6 and 9 but was focused making the turn.

“Definitely starting off so poorly, I wanted to, you know, post better scores each day,” she said. Her father and caddy for the day Kris Smith encouraged her to keep going. “He kept saying, ‘Hey, make more birdies, we might be in this,’” said Smith.

PGA Professional and proud father Kris Smith got emotional as his daughter held up her trophy.

“She kind of backed in, because she played well, but everyone else kind of got backed up,” said Kris. “So, to have a chance at a playoff, you just don’t get your hopes up, you just watch her play.”

And play she did. The playoff started on hole 1, which both Acharya and Smith parred.

“I just wanted to give myself birdie opportunities on every hole,” Smith said. “I putted pretty well this week, so I knew one would fall eventually if we kept playing.”

On the second hole, Smith’s ball landed on the green, 25 feet short of the hole. Acharya’s iron off the tee put her about 4 feet off the green, more than 50 feet from the hole. Acharya tried to save birdie but chipped it 6 feet behind the flagstick. Smith made the 25-foot putt look easy, no cheer or fist pump following its drop.

“I definitely like the back nine better than the front nine,” said Smith. “I feel like at times I can play harder holes better than the easier ones, so I had some confidence in my game going up against the field coming down the stretch.”

“This was pretty special,” she said, reflecting on the week. “My dad typically doesn’t get to caddy. We didn’t know how it would work this week, and it worked pretty well,” Smith said, laughing and looking toward her dad. 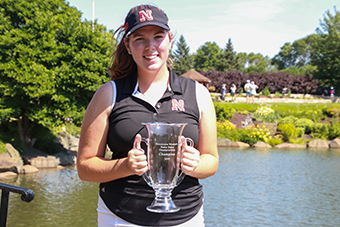