With a 6-foot putt in a battle for par on 18, Brady Madsen ultimately won the 2019 Minnesota State Open Championship with a three-round total of 13-under par.

Amateurs Madsen, Van Holmgren, and Max Tylke fought neck and neck for the title on the back nine during the final round of the Championship.

Playing in the group in front of Madsen and Holmgren, Tylke birdied the final hole to finish the Championship at 12-under par and waited to see if it would be enough to take the title or force a play-off.

In the last pairing, Madsen, Holmgren, and Tyler Leach (8th place and -6 overall) each went for the green on the par-5 18, but only Leach made it on the fairway. Holmgren pulled his shot left into the penalty area, requiring a drop, while Madsen landed in a bunker 50 yards from the green.

Leach failed to get it up-and-down for birdie, and Holmgren missed his 20-foot putt for par and bogeyed. Madsen left his bunker shot short of the green and chipped to 6 feet, setting up the winning putt.

Madsen finished the final round 5-under par with six birdies. Tylke took second, shooting 6-under on the day, making eight birdies. Holmgren came in third at 11-under par and 2-under for the day.

PGA Professionals Brent Snyder and Brian Hills shared Low Professional honors, finishing 8-under overall, and ending the day 4-under and 3-under, respectively.

The Minnesota State Open was presented by Grand View Lodge and was supported by Sterling Cut Glass and Parway Golf. 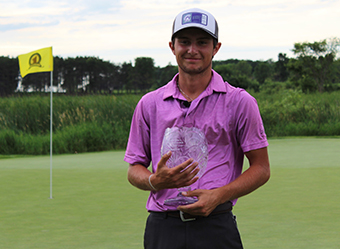