For those of you with a subscription to Golf Digest you probably already know this fact, but for those who don’t – spoiler alert…Troy Burne Golf Club has made ‘America’s Top 100 Greatest Public Courses’ listing again. I’m not sure what is in that Wisconsin soil, but Troy Burne is in some lofty company with the likes of Whistling Straits and Erin Hills of the world. It’s an elite group to be sure and Troy Burne deserves its repeated place in that national ranking. In the 2019/120 edition of the Golf Digest listing it comes in at number 69 alongside such perennial powerhouses like Pebble Beach, Whistling Straits, Pinehurst, TPC Sawgrass, well… you get the idea.

These kinds of accolades come as no surprise to the players in the greater Twin Cities area (which includes western Wisconsin on my map). One look at the 2018 Tee Times Readers Choice Awards and you find Troy Burne popping up in almost every category and taking home first awards in ‘Course with Best Greens’ and ‘Best Merchandise Pro Shop’ as well as a runner-up for ‘Course with Best Playing Conditions.’ All this published in-print recognition should be a call to arms for anyone within reasonable driving distance. Once you hit the St. Croix River, you’re only 10 minutes away.

You can understand why PGA Head Professional Dave Tentis is smiling. Troy Burne sports bent grass fairways and greens from head to toe. Troy Burne’s bent grass came through the winter in flying colors, and the greens are running very smooth and very fast. As usual, there are excellent, private-like conditions at Troy Burne.

A significant addition to the amenities list for 2019 that has customers experiencing a better on-course product is a fleet of 62 new Yamaha carts. The bonus being these carts are equipped with the latest GPS technology. The carts also sport the premium cushy seats and an ultra-quiet ride. That GPS should come in handy to avoid the 120 bunkers that line the fairways and protect those stunning stadium greens. As would be expected at a Top 100 golf course, the grounds are in ‘TOUR quality’ condition. Superintendent Mitch Fossey and his team know that excellence is in the details. As a player, it’s like sitting down to a perfectly cooked ribeye. You take your time, you look around, you soak it in, you digest it slowly and you appreciate the moment.

The Tom Lehman designed course done in collaboration with the internationally recognized architectural firm of Hurdzan-Fry has carefully sculpted fairways that swing right and left between pronounced berms and bunkers both visible and hidden. The par 5 first kicks the round off with a fair example of what is to come. Generous fairway widths transition into a narrow first cut that quickly switch to a deep rough as the berms encroach along the sides. Bunkering is spaced and anything but random. There is a high priority on keeping it on the short stuff. Getting to the green is step one, step two is reading the green correctly and picking your lines across the undulation.

The front nine is dominated by serpentine fairways that lay between berms. You might not feel the wind on the fairway, but it could be blowing steady up high, beware. The par 4 seventh is one of my favorites. A large bunker at the wheelhouse cuts off 2/3 of the fairway width. If the wind is at your back give it a go, if not, a well-placed wood gets you a 150-yard iron into a large tabletop style green. The pars are there, but you will have to earn it.

The back nine starts with an intimidating tee shot that could benefit from a healthy draw to the left. With some distance you may get some rollout, which sets up the second shot nicely. Next up is ‘the’ picture postcard hole at Troy Burne. A line of towering pines in the background frames the long, narrow green with sand on the left and the courses namesake on the right (Burne means creek in Scottish). Take a moment at this par 3 to soak it in, maybe even a photo, it doesn’t get more picturesque than this. Water elements come into play on the back at numerous points, usually jutting into the fairways at key landing areas. Some of these shots are nerve-bending moments so it’s best to be confident and take your best technical swing. The reward for hitting those shots far outweigh the downside of losing that new ProV1.

If Golf Digest and Tee Times kudos aren’t enough to entice you into crossing the river to play Troy Burne, then perhaps your bucket list isn’t long enough. It’s within easy reach, pencil it on that list and see what everyone is raving about. 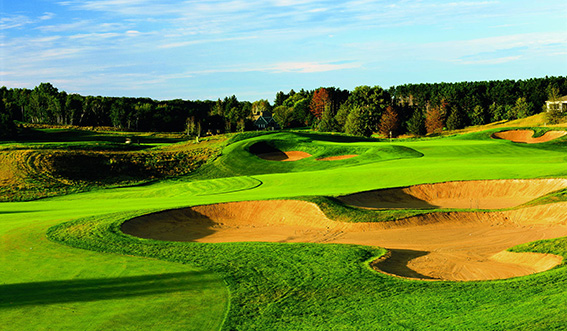 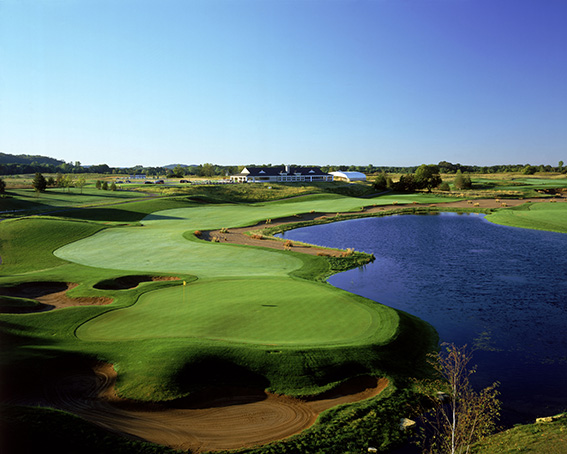