The Basketball Golf Group, BGG for short, was ready! They had made the annual golf trip since their college years. The BGG had won the small school state basketball championship as high school seniors. Yes, there was one junior on the team. He was a transfer and yes, he was the guy who had made the difference in the big game; but it was the BGG’s team. These eight guys had played round ball together since grade school.

At first they had made their decision on where to play based on price. As college students the eight good friends used the golf get together to play golf, but mostly to drink beer and reminisce about playing almost 200 basketball games together over the years.

As they aged and time became more precious than the cost of a round of golf, the choice of locations had run the complete golf spectrum. The selection committee, made up of Slim and Shorty, were always looking for an interesting location. As their hair thinned and six-pack abs became pot-guts, the BGG was just looking for FUN!

A friend of Shorty’s, who worked at the same software company, shared a story of a nice little golf course in a small town in lake country. The creative owners of this golf course had developed a variety of hats that patrons wore while having post round beers on the patio. The hats, in a variety of styles, were equipped with hummingbird feeders attached.

Slim located an old fishing resort only a mile from the golf course on Google and secured two cabins. Each cabin slept four in a private bed. A shared barbeque grill with a big picnic table sealed the deal.

Slim and Shorty had kept the real reason for choosing the country golf course as this year’s venue secret. The mid-June weekend finally arrived. The BGG met up at Lefty’s home on Friday at noon where the small rented motor home was waiting. Lefty, a retired drinker, was always the designated driver. This situation worked well for the members of the BGG who were already in a party mood.

The GPS said the trip would take three hours, but the BGG knew that it would take four, frequent stops for a p**s break.

By the time the BGG got to the resort, Lefty had already taken the annual verbal abuse for missing the front end of a one and one with the score tied with only four seconds left in the big game. The argument over who played what part in the mad scramble for the rebound continued as the BGG came to a stop between the cabins. Bringing the discussion to an end, Slim shouted, “Who gives a s**t! The Kid ended up with the ball in the corner and swished it as the buzzer sounded.”

The BGG high-fived like the shot had just dropped through the net.

Finding a large table on the patio the BGG waited for the waitress. Almost immediately a plump woman arrived with a variety of odd headwear. “Hi, call me Sally. My husband and I own this place and we have a drinking hat for each of you.”

“This is the surprise we have been waiting to spring on the BGG. These are hummingbird hats,” Shorty snorted. “You get first pick Zits, you won the putting tournament.”

Zits selected the large flowered Kentucky Derby bonnet with four humming bird feeders attached. Sally said, “Good choice, the hummingbirds seem to love that one.” Before all hat selections had been made, the hummingbird invasion had already begun.

As the rounds of local craft brews continued the hummingbirds entertained the BGG with their version of aerial warfare. At first the smart phones clicked pictures and videos that were shared with families at home. But by the end of the second round the BGG and the hummingbirds were paying little attention to each other – all except Shorty. He was wearing a golf cap with a hummingbird feeder suspended from the bill. As Shorty watched with eyes crossed, he slurred, “I think this little female loves me! She just hangs in the air drinking and looking me in the eye.”

As the sober Lefty navigated the motor home back to the resort, Zits said, “Wow, two more days of golf and beer with hummingbirds for dessert.” 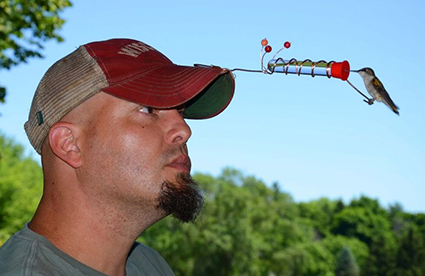