In the 26 years that we owned and operated Mille Lacs Golf Resort, the infinite variety of golf characters that we encountered was never ending. Good golfers, bad golfers, really nice people and some horse’s a$$es. But I only met one truly natural golfer.

Tony was the grandson of a Native American woman who owned a home between the 9th fairway and the driving range. Tony grew up like a weed, with little supervision. His dad, who lived in the home from time to time, was a dope dealer that spent about as much time in the county jail as he did free.

On our range, any ball that was pulled or hooked left ended up in the front yard of Tony’s house. They didn’t mind when we trespassed to pick up the range balls.

When Tony was about 10, I began to notice that he had acquired a golf club and would occasionally hit a few balls back onto the range. No problem!

A few years went by and I noticed that Tony was spending more and more time hitting range balls. Sometimes from his yard, often he would just go onto the range and collect a few and hit them deeper onto the range.

One day the staff was busy so I hopped on the ball-picker cart and proceeded to pick range balls. As usual, Tony was hitting balls. As I approached, he began to slowly retreat toward the safety of his home. I hollered at Tony, “Wait a minute, I want to talk to you.”

He stopped, keeping his eyes fixed on the grass at his feet. I pulled up and said, “I have been watching you hit balls. You have developed a pretty good swing. Let me see you hit a few shots.” For the first time he glanced up at me to make sure that I was serious. I hopped off the cart and grabbed about two dozen balls out of the ball baskets. “Hit one at that tree,” I said.

Without looking at me or taking a practice swing, he grabbed his 5-iron with a baseball grip; both thumbs wrapped around the grip, and smacked a solid shot directly at the tree. “Nice!” I said.

Tony proceeded to hit all the balls in rapid-fire fashion directly at the tree. Perfect contact on every shot. “Keep hitting balls,” I said. “You may be a golfer someday.”

A few weeks later my friend, Joel Goldstrand, golf professional and golf course architect, stopped by to visit about a project we were working on. Joel Goldstrand was a great player, as a collegian he played for the University of Houston and was an All-American. Joel also spent a few years chasing his dream on the PGA TOUR. Joel played in two Masters. Joel knew golf!

I asked Joel if he had a few minutes to watch something very interesting, and he did.

Tony was in the front yard. I pulled up and Tony saw a white stranger and never looked up. I said, “Tony this is Joel Goldstrand, he was a PGA Pro. I want you to hit a few shots for Mr. Goldstrand.”

Tony looked up with a slight grin as I threw a big bucket of balls at his feet. Tony raked a ball close as I said, “Hit it at the tree.” Tony never teed-up a ball; he just began hitting balls at the tree. His swing had perfect rhythm. A long full backswing with a matching follow through, his head stayed solid through impact. After about 10 shots, Joel said, “Tony can you hit a higher one?”

Same swing, but the trajectory was about 20% higher, solid, directly at the old maple tree at the end of the range. With a motion of his left hand, Joel said, “Tony can you make the ball go to the left?” Again same swing, solid impact. The ball started at the tree then hooked about 15 yards to the left of the tree. “One more time Tony, only start it to the right and end up at the tree.” Perfection!

High, low, hooks and fades; Tony entertained us for about 20 minutes. Then Joel asked, “Does your school have a golf team?”

Tony just shrugged his shoulders, and said, “No.”

As we rode back to the clubhouse Joel said, “That kid, Tony, has the most natural talent of any golfer I have ever witnessed. He could be great. You need to keep an eye on him.”

Sadly, Tony vanished into the reservation’s underworld of drugs and alcohol. Occasionally he would hit balls, but his golf passion was gone. 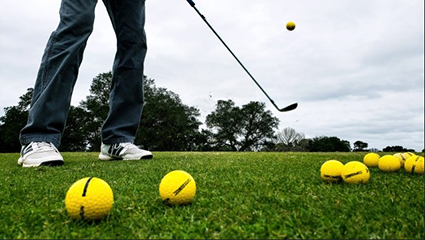