The Corner Office With Tom Abts

The Corner Office is an ongoing series where we provide readers with an insightful look into the thinking and personality of the people in golf leadership roles. This month we feature Tom Abts, at Deer Run Golf Club. Tom has a wealth of golf knowledge and brings his energy and passion to the clubhouse every day. His broad knowledge of golf and golf course operations provides our readers with some great insights into what makes a golf course tick like a Swiss watch. We hope you enjoy it.

Was there a single moment in time where you knew you wanted to be involved in the golf business?

Yes! I was up North visiting my Father-in-Law, and a local guy and I were skating and shooting pucks on their pond. He was asking me about becoming a PGA Professional. At that time, I was a businessman and a member of a country club. The more that I was advising him to enter the golf world as a calling, the more I realized it was what I really wanted to do with my life.

Where did you learn to ‘really’ play the game? High school? College? Other?

While I was in college at Arizona State, I was in a fraternity. When I lost the election for president, I moved out of the fraternity and bought a range pass at the Dobson Ranch GC in Mesa. I hit balls at the range every day from 9 am – 9pm… January – May. Then I came back home to Minnesota for the summer and actually played golf. People were/are amazed at how quickly I became a scratch golfer, but the reality is that I hit a lifetime worth of golf balls during that five month stretch.

What is your thought process in a risk – reward shot situation?

It really depends on how well I’m playing that day. Not the situation, just my confidence.

Looking back on the history of the game, which golfer has had the most impact and why?

Though I love Arnold Palmer, I think Bobby Jones has had the most impact. Of course Arnold was the face of the TOUR, especially during the early years of television. However, Bobby Jones set the tone for golf – especially in America. He dominated golf for a decade (they had ticker tape parades for him in New York) and legitimized golf in America. He set the bar very high as a golfer and a gentleman – Hogan and Nicklaus idolized him. His legacy has continued at the Masters – the pinnacle of modern golf.

What are your thoughts on the USGA rule changes for 2019?

Just not very well thought out. The new out-of-bounds rule is clumsy. The leaving the pin in rule might be okay. The drop procedure rule is dumb. The bottom line is that they are not addressing the real problem; which is that tournament golf and recreational golf are two different games. These new rule changes are an attempt to satisfy both groups… but you can’t.

Is there a current player on the PGA TOUR you really like? If so, who and why?

Not really. There’s a bunch of pretty likable guys. But, no one I particularly care about.

From your perspective is the game growing, retracting or holding the line?

Probably all three. That’s because golf is reinventing itself. Golf was too serious and too focused on low-handicap amateurs. Also, country clubs have lost a lot of their cache. Golf is just basically a joy to play. I think that is returning, and with it we’ll see it grow.

What does the average Joe golfer want more of from a round of golf?

To play well enough that it’s actually a game. Not just swing and hope it goes somewhere safe. They need more control of the ball, and have a fun, friendly atmosphere to enjoy.

If that same average Joe fluffed all his lies, took all the two foot gimme putts and a mulligan on the front and back how many strokes would they save?

What makes your customers most happy when they come out and play your course?

That they truly feel welcome.

Is there a habit or tendency among the casual players that you wish would go away?

Look into your crystal ball and tell us what changes we can expect in the next 20 years?

The realization that most people don’t want to play overly difficult golf courses. For awhile, it was assumed that it was cool to play nightmare courses – sort of a badge of honor. They couldn’t have been more wrong. That will be rectified. 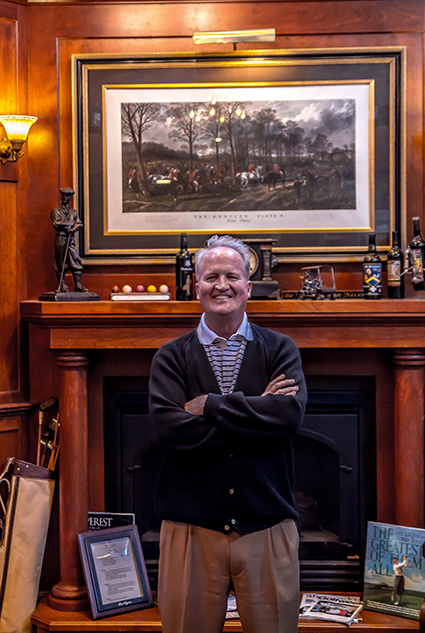