If I Was… A Ranger… Err… Player Assistant

Years ago, before my father retired, he was famous for saying he wanted to become a golf course ranger when his office days were done.

My father loved golf. It was he that instilled that love into both my older brother and me. Mind you, he wasn’t great. He suffered topped shots and slices like most golfers. He was a really good putter. Ironically, he said that no one could ever learn to be a good putter, one had to be born into it, yet I make a living teaching people to play better golf… including how to be a better putter.

Needless to say, we were more than slightly confused when he talked about not wanting to play in the men’s league on Jekyll Island, Georgia, but rather be a ranger. After 40+ years as a corporate lawyer, you would think he’d want to play the game he loved to watch.

But see… that was the thing. My dad loved to WATCH golf. He didn’t actually love playing golf. My dad was a bit of a perfectionist and if he couldn’t do something really well, he’d rather find something else to do. It took me years to realize he really only played golf because my brother and I were fairly good at it. Later in life, he loved to watch his grandkids, both boys and girls, play golf because; they too, were fairly good at it.

Looking back, some of my fondest golf memories with my father were attending PGA TOUR events. My brother, father and I were even fortunate enough to attend the U.S. Senior Open and The Masters together.

Once I finally understood why my dad truly wanted to be a ranger, I started thinking about what it would be like to be one. I started to think about how I would be as a Player Assistant.

I started to smile.

If I was a ranger, pace of play would NOT be a problem. My popularity might not be so great, but slow play… gone!

If I saw a group dilly-dadling or not playing “ready golf,” they’d be warned once. The second time, they’d be moved to the next hole and tell them to write down double par on their scorecards and move along.

“But we paid a lot to play here today and we should get to play all the holes!”

So does everyone else that’s here today so get moving before we all run out of daylight!

If I found someone taking ten minutes scooping up lost balls from the pond (even after they found their original ball), I would less-than-politely remind them that that, in fact, was MY job. Well, maybe not my job, but courses all over the county hire divers to collect lost balls from the water.

Where do you think all those used balls for sale in the golf shop come from?

The first time I ran across a group that parked their carts two feet from the green or tee when the cart path was less than five feet away, I’d do what an old Player Assistant that I used to work with would do. I’d wait for them to finish the hole. As they approached their carts, I’d ask two questions just like him.

He’d usually get a pleasant, “fine, thanks.”

Then he’d ask, “Do you park your car on the driveway or on the lawn?”

After a confused prolonged pause, they would usually answer, “On the driveway…why?”

“Then get your f**king carts off my lawn!”

He didn’t mince words. If he caught them again, he would remove the key from the carts and drive away.

I told you I wouldn’t be popular.

That brings me to my broader point. Most people look at rangers as a nuisance. The fact is, they should be and are members of the golf staff there to assist you. If you are playing the wrong tees and they suggest you move forward, it’s not to embarrass you, but rather make your experience more enjoyable.

If they are asking you keep your cart on the path, it’s not because they want to see you walk, but rather they want to keep the course in the best possible playing condition for everyone… including you the next time you play.

And if they ask you if you are having a good time, they really want to know. If they don’t know there is a problem, they cannot fix it.

So if I was a ranger, I guess my goal would be to make sure everyone had the best time possible so I could watch good golf… just like my father wanted. 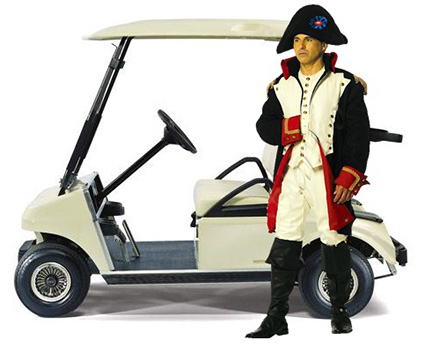