Recently, Tee Times spent a few minutes with Kerry Haigh, Chief Championships Officer for the KPMG Women’s PGA Championship. Haigh has a behind-the-scenes job and is seldom in the spotlight, but has his finger on the pulse of every PGA of America Championship.

The venue for the 2019 Championship is the now sacred grounds of Hazeltine National Golf Club. With memories of the greatest U.S. Ryder Cup Team victory etched in their minds, Minnesota golf fans will have the opportunity to watch the strongest field in women’s golf compete for a Major Championship.

We were able to sit down with Kerry Haigh and learn some of his insights on the upcoming 2019 KPMG Women’s PGA Championship.

Tee Times: Please explain to our readers the reasons Hazeltine National Golf Club has been chosen to host Major Championships including the 2019 KPMG Women’s PGA Championship?

Kerry Haigh: People might think that it is about the golf course. It is true that Hazeltine is a strong golf course, but the main reason Championship golf returns to Hazeltine is the passion of the membership to host Major Championships. From the very beginning, Mr. Heffelfinger developed the golf club to host Major Golf Championships. Each new HNGC member agrees to become part of that passion when they join the club. That passion includes the KPMG Women’s PGA Championship in 2019 and the U.S. Junior Amateur in 2020. The Ryder Cup will also return to Hazeltine in 2028.

TT: When you first moved to the United States, you worked for the LPGA. How has that experience helped you with the KPMG Women’s PGA Championship?

KH: I worked for the LPGA for 4 years (1985-88) running 30 tournaments per year. That was a great learning experience. Since that time, I have stayed very close to the LPGA and its players.

KH: It is always the goal of the PGA Championship Committee to showcase the golf course. We want a challenging golf course with the opportunity for good scoring. The course will reward good shots and be enjoyable for the many fans who will attend.

For the Ryder Cup the golf course was a little softer due to weather than we expect to see it for the 2019 KPMG Championship. Golf fans will also notice that the rough will be thicker, similar to past PGA Championships at Hazeltine. The green speed will be similar to the other Championships.

TT: Please share some of your vivid memories of past PGA Championships and the Ryder Cup at Hazeltine.

KH: The thing I remember most about the Ryder Cup was the gallery. The upper Midwest fans love golf; they really support golf Championships. The crowds were huge, but the sounds that echoed around Hazeltine were amazing. The other thing I remember is the bad weather during the 2009 PGA Championship. When the rains came the membership and the community did what was necessary to get the course playable. The first fairway was flooded and the practice area was flooded. With the help of the fire services and some helicopters, the water was pumped and turf was blown dry.

TT: Typically, the PGA Championships at Hazeltine have been played in August and September. How will a Championship in June change the conditioning of the golf course?

KH: It will be earlier in the season, but the grasses went into the winter very healthy. The wet and cold winter leave some question marks, but Chris Tritabaugh, Hazeltine’s golf course superintendent, will have an answer. Chris, is a true pro who knows the golf course; he knows the grasses. Chris and I know each other very well because we worked together during the Ryder Cup. If there is a problem, he has alternatives for any circumstances. The only thing that Chris can’t control is the daily weather during the Championship.

KH: Chandler is a professional in every sense of the word. He shares the sentiment of all club members: These are women golf professionals, they are the very best in the world, and they will be treated exactly as their male counterparts. The hospitality aspect of the Championship will be the same as it was for both teams and their families during the Ryder Cup.

TT: What have you learned working with Ruth Kimmelshue, General Chair of the Championship and Renee DeLosh, Championship Director?

KH: Both of these women bring Ryder Cup experience and passion to their jobs. Ruth Kimmelshue has a huge job, in the real world, but she seems to find time to attend every meeting. She has made a huge commitment to the Championship.

Renee DeLosh has a great demeanor working with everyone involved with the Championship. She is a tireless worker who has a passion for golf. I am proud of the excellent work that they are doing.

TT: From an insider’s standpoint, tell our readers why Minnesota and Wisconsin have hosted so many Major Championships over the past 20 years, plus two Ryder Cup Matches coming in 2020 at Whistling Straits and Hazeltine in 2028.

KH: The people are the biggest reason. Golf fans from this area love golf. They love to play golf and they love to watch golf. The communities involved are wonderful to work with making our job easier. Finally, the volunteers work tirelessly.

With Kerry Haigh and the management team at the helm, the 2019 KPMG Women’s PGA Championship is sure to exceed all expectations this summer. 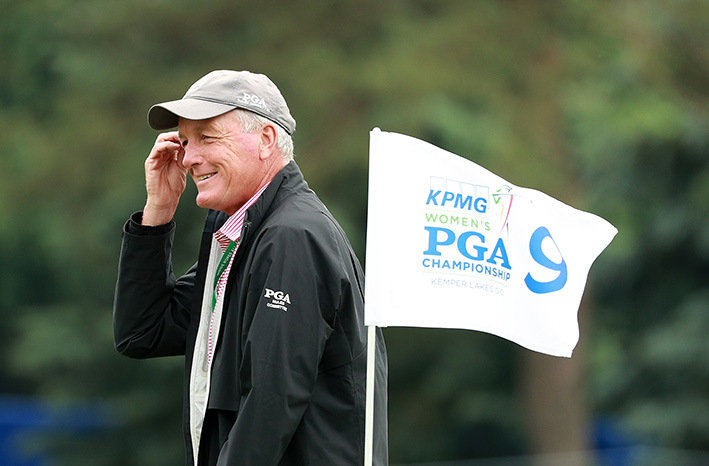