The (Old) Geezers have been friends since childhood. The Geezers were raised on large wheat farms in western Kansas and became friends and competitors playing high school football and basketball. As teenagers they learned to shoot pool at the local pool hall/bar/filling station. During their college years the Geezers learned to gamble playing golf and poker.

It was during these college days that the Geezers got their name. I remember listening as Duane and Brock were discussing a mythical Geezer home. “When we get to be Old Geezers, we will build a Geezer home. It will have four or five pool tables, some poker tables, several big TV sets to watch the ball games. And, we will have a 9-hole golf course. Oh yes, and we will have a big cooler to keep the beer cold and a maid to cook and keep the place clean.”

Authors note: Wheat farming is a relatively effortless way to make a living. Farmers plant their crop in the fall and watch the crop grow until the custom cutter crew harvests the ripe crop in June. There is a lot of idle time.

The Geezer home never came to pass, but the now Old Geezers still enjoy the same pleasures of life as they did in their younger days. At any time during the year, usually on a whim, the Geezers jump on a plane or into one of their Escalades and travel to a fine golf destination. Their routine on a Geezer golf trip is much the same as the routine at home. Get up early, have breakfast and head for the golf course. After the round they locate the best steak house (no damn fish for me) and consume the best the place has: Steak – rare! Martinis straight up and a bottle or two of the best red, then an hour or so of poker before bedtime around 9:30 pm.

The best part of being a Geezer is that they all know each other so well that they can tease, make jokes and take jabs at each other – endlessly. For a group of reasonably wealthy, educated, fun loving and athletic men, golf is the perfect game.

In the summer of 2017 four of the Geezers flew into the Brainerd airport for a three day visit to Cragun’s.

In dry western Kansas there are very few frogs.

As the Geezers were play cards before bedtime, they did not recognize the unique sounds coming from outdoors. Finally, one of them said, “That must be frogs? This part of the country has a million frogs and that is their mating call.”

When Brock got up to relieve himself Duane said, “Let’s catch one of those big frogs and put it in Brock’s golf bag. We all know how much Brock hates snakes!” He is scared to death of them. If he sees a snake, he grabs his shotgun from his pick up and blasts its head off. When he reaches into the ball pocket to get a ball it will scare the crap out of him.”

“I will get up early and catch a big one,” said Steve. “This will be great! Hope that frog doesn’t croak before Brock reaches for a ball and craps his pants.”

Before sunrise Steve was working his way along the shoreline. Sure enough, there were a lot of frogs, but they were hard to catch. When Steve returned to the condo he was wet up to his knees and caring a brown paper bag. “What is in the bag?” Brock asked. “How the hell did you get so wet?”

“Just some stuff I forgot from the car. I was walking along the lakeshore and slipped, almost fell on my ass.”

Getting the frog into Brock’s golf bag proved a little harder than they thought. At the comfort station on the front nine, Brock stopped his cart and went inside for a minute. In that minute, Steve slipped the large (about four inches long) spotted Leopard Frog into the ball pocket.

It was three more holes before Brock hit a ball into the woods. Steve shouted, “You will have to break into another sleeve of those balls your wife got you for your birthday.”

The silence was deafening as the Geezers watched Brock bend over and unzip the ball pocket. The scream echoed through the woods as Brock jerked his hand from the pocket. Then another even louder scream as the frog poked his head out. It looked just like the head of a green snake.

With a plop the Leopard Frog landed on the cart path then hopped into the woods.

Brock was pissed. The Geezers were bent over with laughter. The story of the Leopard Frog is still being retold in the wheat fields of western Kansas. 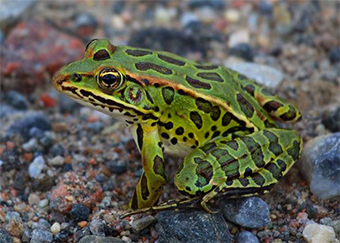