Caddies For The Twins

The twins, Billy and Bobby, were born to a middle class family from Idaho. The very active young boys soon became known as the “B Bubs.” With a father who was a CPA and a board member of the local golf club, and a mother who taught school, the B Bubs excelled at school and golf. The B Bubs spent their summer days at the golf course.

Bobby loved golf and played and practiced every chance he got. Billy played some but spent a lot his time on the putting green drinking soda. The balance of his time he was talking to the superintendent. He was interested in how the automated irrigation system worked and discussing green mower height with his friend the superintendent. Later, he worked summers on the maintenance crew and loved to sharpen mower blades and set the height to a millimeter.

Bobby went to Boise State where he got an accounting degree and played on the golf team. He later took over his father’s practice. Billy went to Stanford and took a job in the Silicon Valley, where he made a fortune.

The B Bubs remained as close as could be as they married and had families. For their 30th birthday Billy gave them a golf trip to TPC Scottsdale, just the two brothers, twins and golf buddies. The golf trip to great courses became an annual event. One year they spent two days at Augusta. Other years they had visited TPC Sawgrass, Whistling Straits and other notable courses.

In April of 2019 Billy picked up Bobby in his personal jet and they were off to a big time golf resort in Mexico. Bobby was playing three or four times a week and kept his handicap in the low single digits. Billy usually played in a few fundraiser outings between the B Bubs’ annual trips.

The course on the tip of Baja was beautiful and extremely difficult with desert jungle or water on every hole. On the range before their first round Bobby was striping it; Billy could not aim far enough left to keep his slice on the range. The resort assigned caddies, Jose’ on Bobby’s bag and Hector on Billy’s, knew the course well and could read the tough greens. They were well schooled in filling divots and raking bunkers but worked silently and somewhat indifferently to how their assigned player was doing.

The B Bubs always played $10 per hole despite the difference in ability. If Billy won a few holes he had bragging rights.

On the front nine, Bobby shot 39 despite a ball in the water and two – three putts. Billy was not so fortunate; he shot 47 with some creative score keeping. Every time he hit his driver, he caught it solid, but it would start a little left of center and quickly made a right turn into the jungle or lateral hazard. Half a dozen new ProV1s were only hit once. “That’s okay,” Billy said. “They have my company logo on them.” Billy, who had always hit his irons much better than his woods, hit some impressive shots to the green after a drop on the right side of the fairway.

On the second tee Billy said, “Hector give me that damn driver I am going to get that thing straightened out.” Then he proceeded to hit that huge slice into the junk. The pattern continued on the back nine. On the 13th tee after a ball into the jungle and a mulligan ball on the same line, Billy said to his B Bub, Bobby, “Starting on the next hole we are playing for $100 a hole. And we are giving the winnings to each of our caddies.”

Bobby said, “Are you sure?”

All of a sudden the caddies became more interested.

On number 14, a tight waterline par-4, Bobby pushed his 3-wood just a little and it bounced and rolled into the hazard on the last turn. Billy turned to his caddie and said in a defiant voice, “Hector give me that damn driver.”

Hector looked at the ground for a few seconds, then looked Billy squarely in the eye, in broken English said, “No senor, I think that the 5-iron will be a better club fo you.”

Billy did win the 14th and at the end of the round the caddies split the winnings and a nice tip.

On the plane ride back to the U.S. and many times since the B Bubs have relived the story of Hector protecting his player when he had a stake in the game. 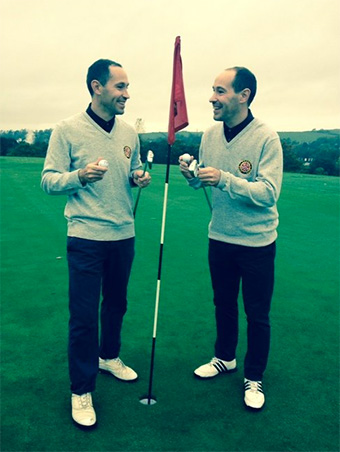