“Hidden Gem.” What else would you call it? Year after year I give it the same moniker, in local and national stories. Why? Why not? It’s true. Amana Colonies is hidden. Amana Colonies is a gem. I dismiss any and all insinuations that an uncrowded course, somewhat off the beaten path, with an unpretentious reputation and an undefined amount of undiscovered potential should flee from the somewhat ambiguous and oft abused label. I seek those places out, especially when the description turns out to be spot on, true. That ambiguous description is what drove me to Amana Colonies for the first time, eight years ago. And… it was the invaluable discovery in that experience that keeps driving me back today.

Stephen Kahler knows what I’m talking about by “undiscovered potential.” He grew up playing Amana Colonies (just outside Cedar Rapids and Iowa City). He fell in love with it when he was young, before leaving Iowa for Arizona, to join the global golf management superteam at Troon Golf. Stephen maintained fond memories of Amana Colonies – knew exactly why year after year the biggest publications in the industry considered it not just among Iowa’s best golf courses but literally Iowa’s best golf course. He knew the course’s potential to keep climbing regionally and nationally, the more attention it received.

So, it had to surprise him to watch the course make a U-turn at the top of the charts and fade from the rankings. It clearly bothered him. He left Troon Golf, partnered up with his Uncle Bob Johnson and bought Amana Colonies. They knew the “bones of greatness” were still there. The course just needed to muscle up – get back in shape – to have the right mindset, start with the core and then flex.

That was four years ago, when Kahler Golf was established and took on Amana Colonies Golf Club as “Project Number 1” (in a portfolio that recently expanded to include the Tournament Club of Iowa). Renovated courses like to flaunt that they’re “not the same course as before.” Kahler Golf flips that script too. “This is that same course as before,” Stephen says. “This IS that course I fell in love with as a kid.” Only better. He won’t say that, but everyone else will. Ask the players from the 2019 Iowa PGA Section Championship how great it is. I heard, “Best shape it’s EVER been in” several times.

It took a lot of work. The course I played eight years ago had the beauty of the landscape, but little else. Eight years ago, I could imagine what Amana Colonies used to be. Today I can see it. I give the credit to Stephen and Bob. They immediately turn the credit elsewhere – specifically to their superintendent, Reid Pickering and their entire team.

“Ultimately,” Stephen says, “people have always been impressed by the natural beauty of this property – the trees, the creeks, lakes and wildlife. It feels like a state park. But year after year the course got tougher and tougher to play for the average golfer and there was a consistent plea to reverse that.” Kahler Golf listened and invested in full-scale changes to the entire property. They implemented several phases of extensive tree removal, brush clearing, made the fairways (especially in common landing areas) much wider, mowed down the rough, covered up penal and unnecessary bunkers and refilled others with new sand. They didn’t just succeed in making the course infinitely more playable. They also made it infinitely prettier.

Both nines have their signature holes, but the restored beauty is especially evident on the Par 3’s. “They’ve always been some of my favorite holes to play,” Stephen nods, “but they’re so photogenic now, they essentially demand a replay.” (Check out their “Unlimited Golf” rates.)

The new clubhouse can accommodate up to 72 guests, with a full-service restaurant and gorgeous view from the patio overlooking the 18th green. An increasingly popular host for weddings, Amana Colonies converted a former barn into a magnificent banquet facility – The Lakeside Barn – with rolling doors and a lakeside lawn perfect for catering to groups of all occasions, celebrating in style the most memorable of ceremonial days.

This year Amana Colonies is placing a special emphasis on their Stay + Play Packages. Golfers get a great double-up deal at the local Zubers Homestead Hotel, the Guest House Hotel, and the old Woolenmill (currently being converted into the boutique Hotel Millwright). Plus, there are condos on the course that can be reserved simplifying the bed to golf transition (and vice versa). Pair the great lodging rates up with the Unlimited Golf options and the value gets better by the hole.

Can a “Best in State” course still be a hidden gem? Of course it can. 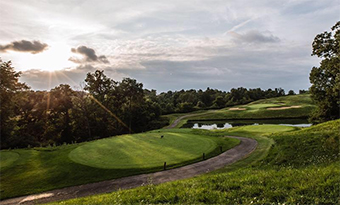 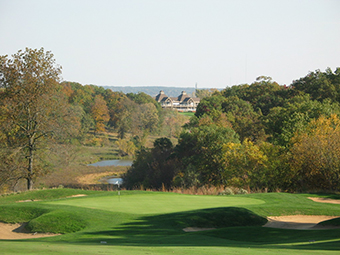