A few weeks ago, a local Pro was talking about how he gets too wound-up in big golf tournaments. I get it. You get it… we all get it. What’s the secret to not losing your mind under pressure?

Here’s what I told him, “It’s good to be excited and nervous – that will make you sharper than normal. However, too wound-up is like shorting out something you plugged-in… it got too much energy. And, too much energy comes from NEEDING it. It’s good to WANT it, but you can’t need it.”

Ok, what does that mean? He agreed with me, and instantly knew what I meant. But, how do I put that understanding into words? Well, I think it goes back to establishing priorities. If winning a golf tournament is the most important thing in your life… it’s just too much pressure… you will freak out. The problem is a lack of perspective, which I believe is a lack of priorities.

If I had to point to one thing that is wrong with our modern society… I would say that it’s a lack of priorities. I’m constantly hearing messages that “you can have it all.” Well, that’s ridiculous. Our lifetime is limited… we don’t live forever. We don’t have the time like Bill Murray did in the movie “Groundhog’s Day” to master languages and art and music and sport and everything else. But what I loved about “Groundhog’s Day” was that Bill Murray finally realized what matters… he finally had priorities… not just a selfish, greedy guy trying to “have it all,” but a guy who wanted a meaningful life with meaningful relationships.

I think a symptom of that “have it all” philosophy leads to people always being in a hurry because they don’t have things prioritized. I play golf down South with a group of about 12 guys. In that group there are some guys who play golf like it’s a race… and they’re always mad at the other guys for not playing in 2½ hours. The other guys are not slow… it’s always under 4 hours and this is a difficult golf course. So, the racers finish fast and then hang around in the clubhouse and are sort of bored. They have nowhere to go anyway – what’s the rush? Well, they don’t even know… they just live like that. And, people like that are always late for things. You’d think it’d be the opposite, but it’s not. They time things too close to try to “do it all,” but of course that doesn’t work and then they screw-up by being late for an important meeting or missing their airplane flight… while they stop for doughnuts on the way.

You see it in everything. There used to be a saying called “a lazy man’s load.” That meant when moving things; they would take too many things rather than take another trip. So, by carrying too many things in their arms, they ended-up dropping and breaking things. They didn’t prioritize. I think most modern people would try to do this… and be proud of it.

I’m writing this from South Carolina. We drove from Minnesota and it gets crazier every year. I can’t tell you how often somebody passes me on the freeway and then immediately cuts over three lanes to exit the freeway. What!!!

They’re risking our lives for nothing… zero advantage.

Golf is very much a game of priorities. Many years ago I played with one of my son’s college friends in Arizona. He hit the ball as solid as a TOUR player. We played at Gainey Ranch and he shot 81. I hit about three solid shots and shot 73. He couldn’t understand what happened. I tried to explain course management to him after his round… I remembered his shots better than he did… he had no strategy – he just went for the perfect shot every time. No wonder he didn’t remember – he never thought about his shots – there was no decision making.

Maybe having priorities and making plans is too old-fashioned. Maybe it’s not “free” enough to “do your own thing.” But are you really free when you’re not planning and making decisions based on priorities… instead of just reacting?

Let’s go back to the pro freaking out under pressure and needing it instead of just wanting it. The calmest people are not the people who don’t care about anything… apathy doesn’t lead to peace of mind. Disorganization leads to anxiety not peace. Simplification is a result of prioritization.

Golf is the perfect antidote to the modern madness. And of course, the modern “gurus” trying to “save” golf are emphasizing how golf should be more like the modern world. That’s just dumb. The beauty of golf is that it’s timeless.

Of course people need to get their priorities straight, but first they have to prioritize. That goes against the modern idea of “having it all.” Happiness and peace of mind come from knowing what you need – not from needing everything. 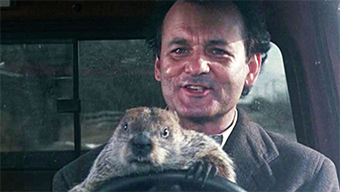