The Psychic attended the 2020 edition of the PGA Merchandise Show in Orlando. How was it? In one word – OVERWHELMING!

As the Delta jet touched down at MSP the Psychic was suddenly slapped with a cruel dose of reality. The fresh snow swirled like mini-tornados from the reverse engine thrust. Golf in the frozen North is still months away.

During the entire flight from MOC (Orlando International Airport), the Psychic had been attempting to wrap his arms around the, larger than life, three day experience at the Orange County Convention Center. He knew that golf was big business, but the Psychic had no idea of the diversity of golf related products or the grandiose display areas and booths developed by the vendors.

The Psychic had mentally replayed highlights of the trip. The Psychic was excited to finally meet Jim Sorenson, the boy from Bloomington, Minnesota who won the 1985 USGA Public Links Championship. Sorenson, the founder/owner of Momentus Golf, has sold thousands of golf training products on Golf Channel and through digital marketing. Momentus and Sorenson were at the golf show pushing their new bunker rake, Bunker Wizard. Bunker Wizard makes raking bunkers easy.

The Psychic ran into 97-year-old Minnesota golf champion and famous golf artist Bud Chapman. The Psychic had purchased a print of the Niagara Falls hole from Chapman, who autographed it, years ago. (Chapman has now shot his age over 3,800 times.)

As the Uber driver backed out of the driveway, the Psychic dragged his travel bag into the garage. Too tired to unpack, the bag would wait until morning.

The Psychic slipped into his favorite pajamas and melted into bed.

Sleep was elusive. “Golf Is Connected” beat like a large bass drum in his mind. He glanced at the digital clock as the orange numbers approached midnight. “Golf Is Connected” vibrated through his mind. In his mind the Psychic saw the golf carts at the PGA Show with USB ports. He visualized golfers listening to music, getting stock quotes, taking pictures or videos to send to their friends from their seat on their golf carts. The Psychic recalls the solar powered golf bag that can charge a cell phone. The golf bag has a slot that holds a cell phone that is perfectly aligned to take video of the golfer’s shots. He remembered watching a friend practice putting live on the putting green at Pebble Beach.

What will this connected generation of golfers be using technology for a few years from now?

Without thinking, the Psychic kicks the covers back and moves toward his study and the see-all magic crystal. Before the worn turban has settled onto his head the globe begins to illuminate.

As his eyes focus into the depth the Psychic is startled by the erratic fluttering of a bird silhouette. No not a bird – a dragonfly. Yes, it is a dragonfly. To the left the Psychic sees a video that he watched at the PGA Show in the Dragonfly booth. The video is of a golfer who is attempting to become a professional. Even with continuous practice and strength training, the results are not there. Electrodes are attached to the young golfer as he continues to practice. The video created from the, swing copy, electrodes show the exact relationship between that swing and the perfect swing.

Suddenly the crystal ball is filled with a multitude of videos of golfers in the future, each with a robotic mechanism attached to their body.

The Psychic is attracted to an image of a golfer who looks entirely normal – except for hundreds of tiny glowing pinpoints covering his body. The golfer addresses his ball then peers into a screen sitting at eye level. The following information is displayed on the screen: Distance to the hole – 163 yards. Wind speed and direction – 30° right into his face at 6 mph. Downhill 12’8”. Temperature in normal range. Elevation 4,326 ft. Pin location 18’ behind front right bunker. MOST EFFECTIVE SHOT – high soft fade with a 7-iron for this golfer.

The Psychic backs away from the radiant globe. Will this device, or others like it, be allowed in competition? How low of a score could a golfer shoot? Will it work with a putter?

The Psychic spends the entire night viewing a universe of technology designed to create a human/robot connection. The robotic improvement to swing technique, muscle memory and course management will create a new game played on the same courses his golf heroes of the past played with hickory shafted clubs. 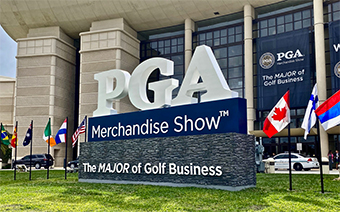