As I walked into the over 1 million square-foot Orange County Convention Center that was hosting the 2020 PGA Merchandize show I wondered if I was going to find any game changing technology.

One can think back to the advent of the gutta percha golf ball in 1848 from a feather stuffed ball or the use of steel shafts in the 1920s as game changers or milestones in the history of golf. Recent historical changes include the popular introduction of the Pittsburgh Persimmon by a small startup company, TaylorMade, during the 1980 PGA merchandise shows. (Yes, I said shows back in the day there was the East Coast hosted in Orlando plus a West Coast PGA show normally hosted by the City of Las Vegas. In fact my first PGA Show was 1982 in “Sin City.”)

More modern changes include the advent of carbon graphite shafts after the prices came down considerably during the 1990s or the accepted use of distance yardage devices during the mid 90s. The governing bodies have made rules that allow for the acceptance of these changes however with some minor restrictions. For example, there was a 1000CC driver made by Golf Smith, that made the USGA quickly rule to restrict the maximum to 460CC (along with restricting the length of a shaft after Minnesota’s own Bud Chapman routinely had a 6 foot long driver that he could hit 300 yards plus even at age of 75!)

Measuring devices are restricted with no slope or additional information during most major professional and amateur events although that stance is softening. I predict that very soon you will see the PGA and those all governing bodies agree to the use of these devices.

This year’s show showcased over 1,000 vendors including some 200 first time participants and or “new product participants.” Most new participants had either minor cosmetic changes to an existing product – like a better way to hold your cigar off the ground or built-in back supporting pants. With two glaring exceptions!

Callaway golf introduced the “Mavrik” drivers an irons designed with the use of A.I. (Artificial Intelligence), According to Callaway’s marketing director, the use of A.I. allowed them to create something completely groundbreaking, redesigned face plate with irregular waves, that in the past would’ve taken five to seven years of trial and error instead of two to three months! The claim is for a larger sweet spot with better accuracy on off center hits plus improved distance.

The second potential breakout was Bushnell golf. Its model PRO XE features not only distance and slope but temperature and barometric pressure! TMI? Maybe… But those of us that have played golf in Minnesota or other cold states when it was 34° or 100° can recognize the difference that barometric pressure has on how far a golf ball travels!

Approximately 1/3 of the golf show involves soft goods mostly men’s and women’s clothing. Surprisingly, soft goods are the greatest profit margin for most golf companies. No wonder Nike decided to get out of the golf club business. My takeaway was that not much is changed from last year with the exception of the neon and bright colors being toned down. Women’s floral prints were prevalent at most vendor displays along with more smart fabrics.Despite the John Daly “Loudmouth” line, the toning down seems to be equal in the men’s lines. Polo’s classic line will always be “classic,” and Ricky Fowler’s Puma line seems to be a trendsetter for the younger crowd. His orange and bright greens are still in style, but his new look prints are in.

Finally the Minnesota connections, CertiFresh Cigar out of Robbinsdale, MN. Eric Nelson and his company have created a unique way to keep a cigar fresh and package it to market to your golf course. It includes a reusable tube with a temporary small humidor at reasonable prices.

And Vlad Gribovsky out of a Waconia, MN has added the ability to have custom colors, logos and names imprinted on his patented “Putting Stick.”  The Putting Stick is now endorsed by over 200 Touring pros and used by many more.

Bushnell also introduced arguably the “coolest” product at the show. The “Wingman.” A waterproof speaker that doubles as an audible GPS measuring device. You can still listen to music, but the coolest feature is it comes with a small coin size remote that doubles as a ball marker. Once paired to the free app, just push a button and the music stops and it tells you yardages to the front, middle and back of the greens. Sadly, it does not hit it for you…  yet! But a really fun feature is you can pre-record three phrases to play back!! I can think of a few “Caddyshack” movie lines or song clips like “Blue Bayou” to razz your friends! The device also includes its patented “Bite” magnet technology that locks the speaker tight onto the golf cart, a 10 hour battery life, an extra USB port and is set to launch in April for $150.

It’s not often that you can improve on a golf shoe and consider it one of the new best products. Adidas new “CODECHAOS” line might just change your mind. These golf shoes feature spiked or proprietary ‘Traxtion and Twistgrip’ spikeless outsole for the ultimate in slip resistant traction. It’s fully waterproof and still has ‘Boost Midsole’ that according to Julie Oerther, a Midwest regional rep for Adidas, “Boost eliminates fatigue after extended use because unlike other golf shoes we eliminated the air that over time weakens thus our shoes offer greater support and comfort.“ The shoes are available for both men and women and come in a variety of colors, priced from $150-$130.

The innovators at Sun Mountain have done it again with the introduction of the Kube golf travel bag.

Kube looks like an ordinary, small, plastic suitcase but unbuckle it and it opens into a full-sized golf travel bag. Kube’s folded size is merely 9” x 13” x 14.5” and weighs only 6.8 lbs. Kube is constructed from durable, ballistic style fabric in combination with plastic half-shells with dense foam padding through the top of the bag to protect golf clubs. Kube come in eight colors and priced at $229.99.

Finn is a new electric golf cycle that’s adding fun and speeding up pace of play at a golf course near you. Finn Cycle is a two-wheeled, single-rider cycle with an electric motor and lithium battery that offers a comfortable and stable ride that leaves all who ride it smiling. Finn Cycles are currently part of the rental fleet at over 70 golf courses across the country with more cycles shipping daily. A limited number of cycles is also available for sale to the public at $3,699.

Will the 2020 show go down in history as the show that markedly changed the golf game forever? Not likely, but it’s always fun to see these companies try. 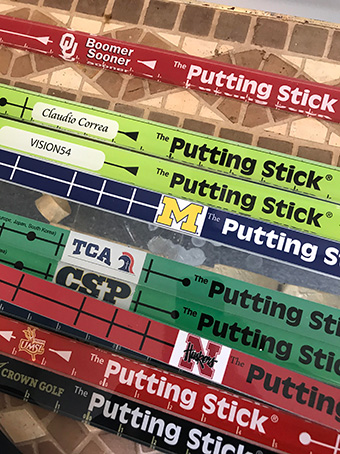 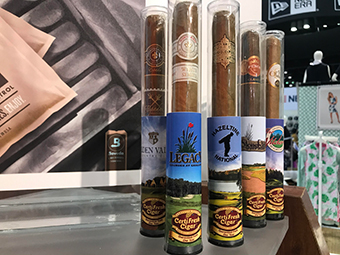