Half way through my 77th trip around the third rock from the sun, I have become more aware of time, as measured numerically – by numbers. 82 victories is a huge number. When I line-up all of my 76 birthdays, I will need six more to reach Tiger’s number 82. Of course I am attempting to draw a parallel between the length of my life and Tiger’s TOUR victories.

As a golfer since age 10, I have had many golf heroes. Interestingly enough, the golfer who Tiger tied, Sam Snead, was my first golf hero. I still remember studying Sam’s swing in detail – especially the left knee move to allow his body to rotate creating a repeatable and powerful swing. While Snead was still on the top of my hero radar, I remember watching The Johnny Carson Show many nights. One night Carson had a 4-year-old kid, named Tiger Woods, on his show. Young Tiger drove the ball into a net, then chipped and putted hitting every shot perfectly. Then little Tiger stated, “I want to be the best golfer in the world.”

It did not take long for young Tiger to become the man to beat in junior golf. With Tiger’s intensity and the fist pump, he quickly became famous as he made big putt after big putt. He won three straight USGA Junior Championships closing with huge putts to win each. Remember Pumpkin Ridge and TPC Sawgrass?

As Tiger continues to chase Jack Nicklaus’ record for major victories (that once seemed impossible) he won the 2019 Masters. He has proven he can still win a big one. The victory in Japan plus the Masters has proven that he is healthy enough to play with the guts and determination to win.

Tiger holds almost every record in professional golf. Notably, lowest score ever for the Masters and U.S. Open. Tiger also holds the record for largest margin of victory for those two prestigious events.

Who knows how many victories Tiger would have on his record if he had not been sidelined with a variety of injuries, for months sometimes, for a year or more other times. This fact was made obvious with a list of Great Golf Champions published recently. Tiger Woods has won an amazing 82 tournaments, but he has won 22.8% of all the professional golf tournaments he has participated in since day one on the TOUR. Most golf fans compare Tiger with the greatest Majors winner, Jack Nicklaus. Big Jack has won 73 tournaments compared to Tiger’s 82. Sounds like Jack and Tiger are close? Not really, Jack played in 595 TOUR events while Tiger has played only 359. If Tiger had played 595 tournaments he would have won 135 times. That would be over twice as many victories as all great golfers except Jack Nicklaus and Sam Snead.

Even for a grey in the tooth golf fan like me, Tiger is still the greatest draw in golf. Tiger shared the same DNA as Arnold “The King” Palmer. They both became larger-than-life fan favorites and heroes who had the ability to draw golf fans to the flat screen – Tiger continues to win, Arnie continues to be loved.

I hope that I can live long enough to watch him win a major at age 60. Don’t count this Superman out.

TIGER IS GOOD FOR GOLF! 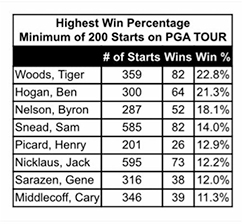